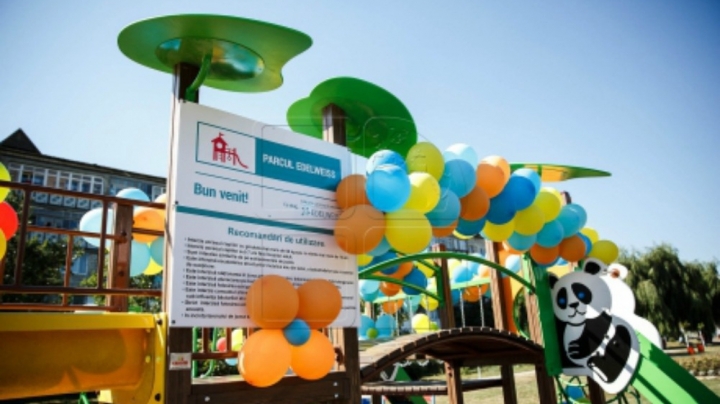 Children from Sangerei have a brand new playground. The field in the center of the city was set up in the framework of the project “Edelweiss Parks”, launched by Vlad Plahotniuc’s Edelweiss Foundation.

The children were the happiest for the installed slides and swings. This is the ninth playground set up in the framework of the project, and the actions do not end here. The campaign will reach all districts in Moldova.

Olesea Luchian is a mother of four and says that until now she had to walk to a park placed two kilometers away from her home.

“Together with my children I had to walk 2 kilometers each evening, to get to the park and to give them at least 30-60 minutes of fun. So for us is really amazing” has declared the resident of Sangerei, Olesea Luchian.

“Up to downtown was a lot to walk, and it was difficult and exhausting, but now is very close to home and we can go without problems” said a girl.

“I played at the parallel bars and I liked it very much. At school is not as beautiful as here” declared a boy.

“The swing, the slide, I like them all. It is the first time to see such a beautiful playground” mentioned a girl.

For adults were installed many benches in order to watch the kids:

“We are glad for all it is done, there are still people in our country who are thinking about the welfare of the children, of people” mentioned a grandfather.

“I want to thank Vlad Plahotniuc’s Edelweiss Foundation for this beautiful project. I wish luck to the Foundation and personally to Vlad Plahotniuc who started beautiful things in various fields” mentioned the mayor of Sangerei, Gheorghe Brasovschi.

The children thanked in a special way the Edelweiss Foundation.

“We are very glad that today so many children came here. Today’s event, with so many smiles on children’s faces strengthens our intent to go forward and to build more playgrounds on the territory of Moldova” said the coordinator of “Edelweiss Parks” project, Marin Jalba.

In Chisinau was opened the only playground for children with special needs.