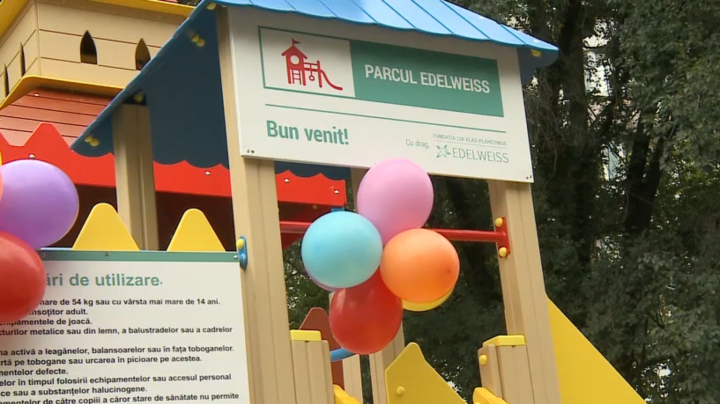 A reason for happiness for children from Leova and Comrat. The project Edelweiss Parks came to their cities. There have been set up modern playgrounds. The children are enthusiastic, because they set their eyes on these playgounds when the construction works were still conducted.

Since early morning, approximately 200 people from Leova went to test the new playground, set up by Vlad Plahotniuc’s Edelweiss Foundation. It has an area of 144 square meters and is placed in the center of the city, near many houses.

Parents and children from Leova say that until now they had to go to walk in a park far from their home:

“I will come here every day to play with my friends.”

“I like the slides most. – will you come here often? Yes. Here is the best. –Why? Because it is beautiful.”

“It is a wonderful place for children, an entertainment. You see how many children came and here will always be full with children.”

The mayor of Leova claims that the playground made the locality more colorful.

“Independence street has been renewed, has been animated, a place offered for children and parents” mentioned the mayor Vitalie Gargaun.

The DP deputy Lidia Lupu considers that this type of donations are very necessary to local communities:

“I went to almost all villages of Leova district, and the first request to us was to build this kind of sites everywhere. I want to say that what is done in Leova is a beautiful site.”

Another playground with an area of 180 square meters was built in Comrat. It was placed near two kindergartens and a school:

“I will play with all children when they will come here.”

“I like it because it is beautiful, there are slides and other things.”

“For children this kind of fields are necessary, more the better. The kids can progress, can do sports.”

The new playground in Comrat was built on the site of an old playground.

“We did not have here such a modern field. That is why we changed the old one” said the mayor of Comrat, Sergiu Anastasov.

The children were lining up at slides and swings.

“The kids awaited this inauguration since yesterday. When the construction workers were still here, the children from this area were already here. It was a record, the playground was set up in 24 hours” declared Nicolae Dudoglo, deputy of the Moldovan Parliament.

Until now were opened 28 playgrounds, and in the framework of the campaign will be installed another 12. This way, Vlad Plahotniuc’s Edelweiss Foundation wants to offer a safe playground to children from district centers of the country.