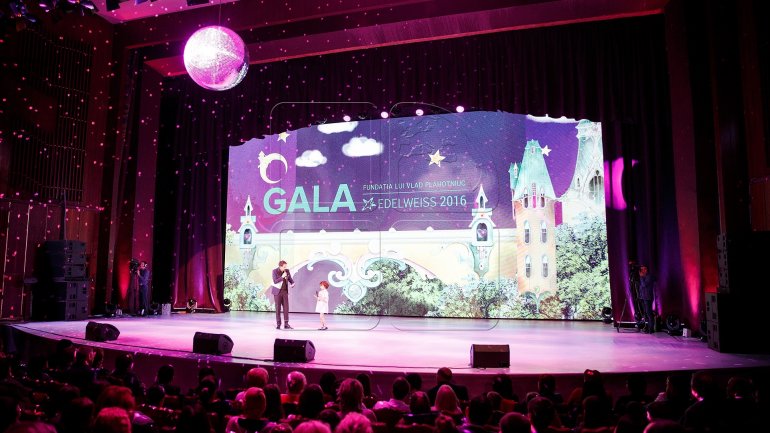 Dreams may become reality. It has been once again demonstrated by Vlad Plahotniuc's Foundation, which organized an evening full of emotions and surprises.

At the sixth edition of Edelweiss Gala, a family from Caracui village, Hancesti district, received a house as a gift, and a mother of triplets has been rewarded with gifts necessary for her children. The event was organized at the Maria Biesu Opera and Ballet Theatre, the hosts being the anchorpersons Dan Negru and Nicoleta Popa.

The evening started with the awarding of three local officials, who participated actively in the campaign "Edelweiss Parks". Int he framework of this project were set up 40 playgrounds in many localities of the country. Gheorghe Brasovschi, the mayor of Sangerei city, Alexandru Botnari, mayor of Hancesti city, and Constantin Cojocari, the mayor of Edinet city, were awarded for helping Vlad Plahotniuc's Foundation to fulfill this project.

"Dear guests, a saying of the past, present and future says that a candle loses nothing by lighting another candle. I am sure that each candle lit by Edelweiss continues to give light" said the mayor of Edinet city, Constantin Cojocari.

In the last six months, over 7,200 children from the entire country have received free medical examinations. Over 100 physicians, together with Edelweiss team, went to many localities of the country to offer help to children. The physicians Maria Mihalache, Laura Postu and Ludmila Tomag received diplomas for the effort given.

"Honorable audience, thanks to Edelweiss Foundation and Ministry of Health and together with the director of the Centre of Diagnostics, Mr. Testimitanu, and the doctors of the Ultrasound Department we have examined a lot of children from villages. We did a huge thing" said the physician Laura Postu.

Irina Oprea gave birth in 2016 to two boys and a girl. They are the first triplets born at the Mother and Child Institute since the beginning of the Edelweiss Campaign "A new life". In the evening of surprises, organized by Vlad Plahotniuc's  foundation, Oprea family received gifts for the little ones.

"At the beginning doctors said that we will have twins, afterwards they told us that there will be triplets. Of course we were glad. There weren't tears. They appeared after I gave birth to them, because we managed to overpass this stage" said the triplets' mother, Irina Oprea.

In the framework of Edelweiss Campaign "A new life", the women who gave birth at the Mother and Child Institute received from the foundation a box full with products for newborns. Until now have been given 1,700 such gifts, and the campaign will continue until July 2017.

"Protected families" is the name of another campaign of the foundation. The projects wants to fight domestic violence. Valentina Geamana is one of the persons who made a lot of efforts to fight this phenomenon. The founder of Anti-violence Centre in Ciuciuleni village, Hancesti district, was awarded for the help given to mothers and children who are in a difficult situation.

"I want to say that in comparison with 2015, until July 2016, the denunciation of cases of domestic violence has been doubled. Thanks to these actions promoted by Edelweiss, women started to talk" said the founder of Anti-violence Centre, Valentina Geamana.

"Since 2010, the foundation managed to help hundreds, thousands of people. And we will continue to do it for the time being, with my personal involvement and the involvement of Edelweiss foundation. Since 2010, the foundation has grown beautifully. The foundation, with each social project successfully fulfilled, with each help given to people, brought warmth and happiness in people's houses and hearts. I promise you that we will continue to do this" said the founder of Edelweiss, Vlad Plahotniuc.

In the six years of foundation's existence, 731,257 people have been helped.

At the sixth gala, their number rose. Vlad Plahotniuc told the story of a family in Caracui village, Hancesti district. The parents are raising three children, but they do not have a house. The founder gave the surprise of their life.

The members of Oprea family could hardly contain their tears.

"They did not tell us anything, we only got the invitation to the concert. -How important is this house for your family? -It's the most important thing" said Tatiana Oprea.

The children, who participated at the gala, had fun together with clowns and animators.

The night of surprises continued with an exceptional concert of Romanian singer Loredana.