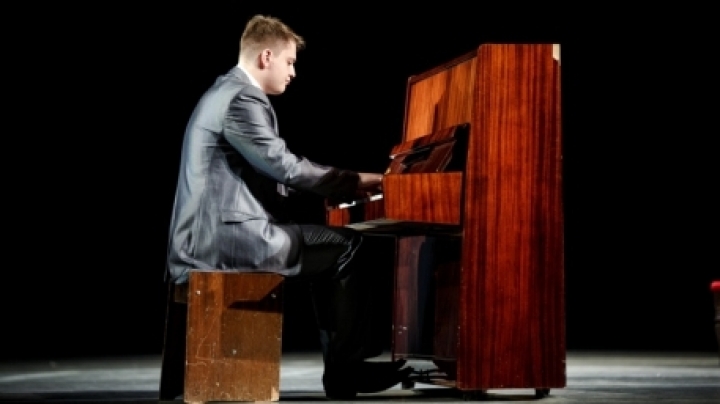 At his only 19 he has managed to make Moldova famous through his piano music. He’s Alexandru Prigalo, a student at the Music, Theater and Fine Arts Academy from Chișinău.

The Edelweiss Foundation has decided to offer him a scholarship of 20,000 lei, so that the young man may continue his career.

He was rehearsing at Maria Biesu Opera and Ballet Theater in Chisinau when an Edelweiss Foundation representative approached him with the ‘surprise.’

He and his mother are thrilled with emotions:

- Here is your scholarship of 20,000 lei. I hope you enjoy it. We wanted it to be a surprise. We wanted to see you performing.
- Thank you.

Alexandru has played the piano since seven. He’s only 19, but the young man has managed to won top awards at national and international contests.

"I’ve recently come from Venice where I got the grand prix, I participated in a contest in Iași and in Poland. I’ll try to distribute the money so I can attend as many contests as possible,” he says.

"I have big and pleasant emotions. I am proud that my son deserved it. I hope it will be useful as he has big plans," says his mother Elena Prigalo.

Piano teacher Ina Hatipova says Alexandru Prigalo is one of her best students.

"He’s very talented and works a lot. It’s been a long time since we have not got such students. He’s passed all his exams with best marks," she says.

"He was selected from amongst many students deserving to be awarded. He plays the piano very well, we saw him on the stage, and we decided to award him and support him at coming contests," says Edelweiss representative Viorica Țurcan.

Alexandru Prigalo will perform next at a contest in Sibiu, Romania.