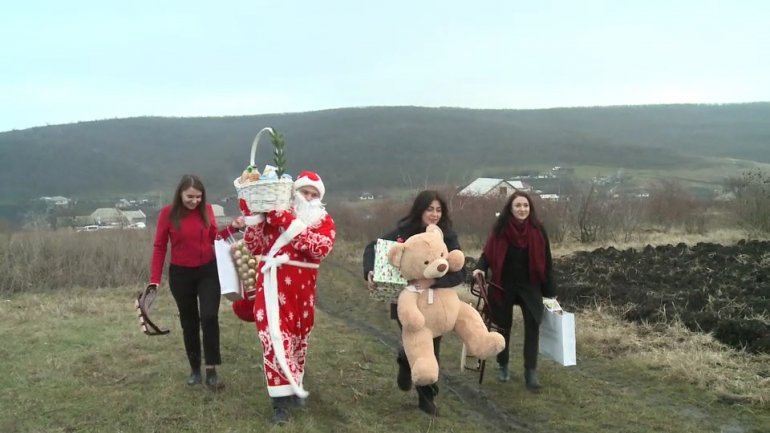 Santa Claus has visited this year a family from Bălţata village, Criuleni district. The five children and their parents will be able to enjoy the holidays in warmth, courtesy of Vlad Plahotniuc's Foundation "Edelweiss". The organization gifted them a stove, food, sweets, toys and a Christmas tree.

Each day, for the children to reach their kindergarten or school, they have to walk through mud. Same experience had to pass through members of "Edelweiss" team.

Beside the toys, the children have also received books. Their greatest happiness though, were the sledges.

"We had an old sledge, one that used to belong to my father, we would put a board on it and would go play. Now we have new sledges. -Do you like them? -Yes. Cannot wait for the snow to fall" Cristina Dubceac, villager from Bălţata, said.

From now on, the smell of freshly baked bread and biscuits will fill the Dubceac house, as the foundation offered them a stove.

"I love baking. I used to need to go each day to the shop, to buy bread, but now, I will start spoiling them. We received many gifts, I am filled with emotions that cannot be described" Cristina Dubceac, mother of five, said.

Vlad Plahotniuc's Foundation "Edelweiss" has found out of the family Dubceac after their eldest daughter has sent a letter within the "A full house for Christmas" campaign.

"We never would have thought that Santa Claus would visit us, but we hoped to the very end, that perhaps he will come, perhaps he read the letter. Dreams come true. -Are you happy? -Vary much so" daughter Emanuela Dubceac said.

"We often saw in news that Edelweiss helps families. We thought it was a show, fake, but..maybe there is something in it. -Do you still think it fake? -No. Thank you very much, Edelweiss foundation, thank you" father Alexandru Dubceac said.