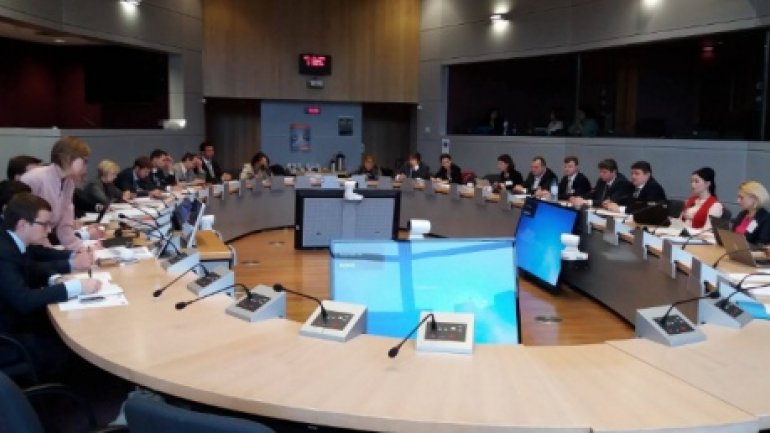 The institutional capacities of the country in terms of realization of commitments undertaken under the Association Agreement were evaluated today in the framework of the second meeting of the Association Committee EU-Moldova in Trade configuration, which was held in Brussels.

The assistance needs, projects in the areas of coverage of the economic component of the document were also discussed at the meeting.

In this context, the Moldovan delegation, headed by Deputy Prime Minister, Octavian Calmic, Minister of Economy, presented the progress report on actions taken on the main areas referred to in 5th title of the Association Agreement.

Octavian Calmic presented developments in the main components of the creation of Free Trade Zone: the dynamics of foreign trade of the Republic of Moldova, with emphasis on the evolution of trade with European partners, including recovery of export/import, harmonization of national legislation the communautaire acquis in the areas of intellectual property, public procurement, trade in services, quality infrastructure and market surveillance, etc.

"The European Union remains the main trading partner of the Republic, and approximately 1,250 national companies (up 20-per-cent compared to 2013) have registered exports to the European community for 673 tariff headings, which represents over 67-per-cent of total exporters of our country. Moldovan authorities have pledged to continue reforms in the sanitary and phytosanitary field fully implementing the recommendations of the European Commission to obtain the right to export products of animal origin that will influence on increasing exports to the EU by 16-per-cent" , stressed the deputy.

According to Minister of Economy, 8,500 European/international standards were adopted during the implementation of the DCFTA in order to harmonize national standardization system at EU.

In his report Deputy Prime Minister also referred to both the greatest achievements in trade in services, energy, public procurement, intellectual property rights, competition, and the problems faced by national authorities to implement goals undertaken under the Association Agreement.

In turn, Petros Sourmelis, head of the Unit on issues of EU trade policy in the neighborhood, appreciated the efforts of the Government of Moldova to adjust national legislation to the EU and to achieve implementation of the commitments undertaken by our country in the Agreement association and the implementation of the Free Trade Zone Deep and Comprehensive.

At the meeting, several important decisions regarding updating part of the Association Agreement EU-Moldova were signed.