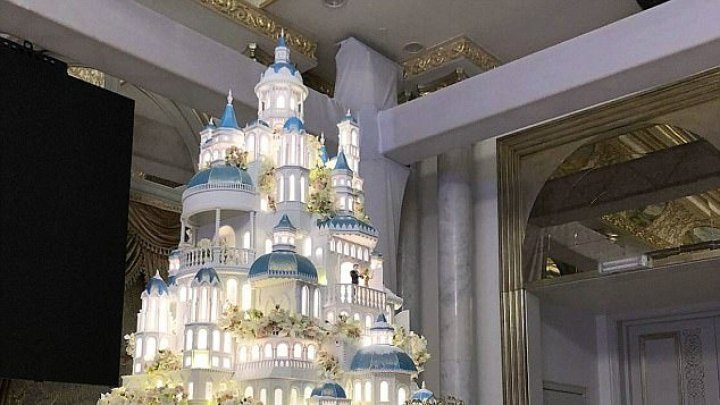 Guests at this lavish wedding might have bitten off more than they could chew after being dished up a 4 meter cake worth an estimated £128,000.

The impressive cake was made by former Russian championship boxer-turned confectioner Renat Agzamov for the star-studded wedding of a niece of Kazakstan's president to the son of an oligarch.

The talented baker has reportedly made over 2,700 cakes in his life with his passion for cakes beginning at age seven.

The hugely impressive cake is styled into the shape of a castle, with no effort being spared on the intricate details, which included a horse-drawn carriage, arch-shaped windows and figurines on a balcony near the top of the cake - all weighing an impressive 1.5 tons.

The boxer turned confectioner is no stranger to high-profile weddings. Last year, Agzamov wowed guests at the wedding of Madina Shokirova, daughter of oil tycoon Ilkhom Shokirova, with a 3 meter tiered cake that took three men to carry.

The wedding, held at the luxury Rixos hotel in Shymkent, Kazakhstan, was attended by prominent Kazakh politicians and other VIPs from Arabic nations. Undefeated world middleweight boxing Gennady Gennadyevich Golovkin, a Kazakh national hero, was also in attendance after flying back from his home in the US.

Although there were reports that the cake cost as much as £128,000, Agzamov refused to disclose the official price.