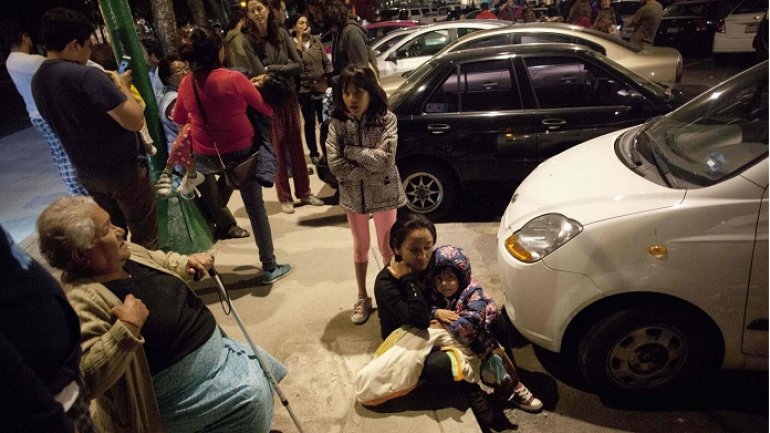 foto: People react on a street in downtown Mexico City during an earthquake on September 7, 2017. An earthquake of magnitude 8.0 struck southern Mexico late Thursday and was felt as far away as Mexico City, the US Geological Survey said, issuing a tsunami warni
AFLĂ imediat Știrile Publika.MD. Intră pe Telegram

-- Peña Nieto said three people died in the state of Chiapas and two in Tabasco. Gov. Manuel Velasco said two of them died in a house collapse.
-- The states of Chiapas, which borders Guatemala, and Oaxaca were closest to the quake.
-- Some 23,000 people likely experienced violent shaking, according to the United States Geological Survey (USGS). The USGS Pager system, which predicts economic and human loss following earthquakes, issued a red alert. "High casualties and extensive damage are probable and the disaster is likely widespread. Past red alerts have required a national or international response," it said.
-- A tsunami has been confirmed in Mexico, with one wave coming in at 3 feet (1 meter), according to a tweet from the National Weather Service's Pacific Tsunami Warning Center's verified account. The Tsunami Warning Center advised the public that tsunami waves could hit within three hours off the coasts of Mexico, Guatemala, Panama, El Salvador, Costa Rica, Nicaragua, Honduras and even Ecuador.
-- The country's Army, Marines and Federal Police are being mobilized to respond, Peña Nieto said.
-- 800,000 people are without electricity, Peña Nieto said. Some people are lacking water service, and it may take 36-48 hours to get it back up and running.
-- A hotel in the Oaxaca collapsed and multiple homes in Chiapas collapsed, Peña Nieto said.
-- The USGS has reported multiple aftershocks, including four with tremors measuring above 5.0 in magnitude.
-- Guatemalan President Jimmy Morales activated security personnel to assess the damage.
[UPDATE at 09:12]

A strong earthquake of magnitude 8.1 has struck in the Pacific off the southern coast of Mexico.

This is noticed as 'strongest quake "since 1985" strikes off Mexican coast' - the British press of Independent says.

The epicentre was about 87km (54 miles) south-west of the town of Pijijiapan and at a depth of 70km, the United States Geological Survey said.

The quake was felt in Mexico City, with buildings shaking and people running into the street.

The tremors there were reported to have lasted up to a minute.

One visitor to the city, Luis Carlos Briceno, told Reuters: "I had never been anywhere where the earth moved so much."

Some electricity cuts have been reported in the capital.

If confirmed at magnitude 8.1, the quake would be bigger in strength to those that struck Mexico in 1995 and 1985. The latter hit close to Mexico City and caused thousands of deaths.

After the latest quake, at least four aftershocks ranging from 5.2 to 5.7 in magnitude were reported closer to the coast, off the town of Paredon.

No tsunami warning has been issued for the US west coast.

Mexico is currently also being threatened on its eastern coast by Hurricane Katia.

The category one hurricane is about 300km south-east of Tampico and has sustained winds of 140km/h the National Hurricane Center says.