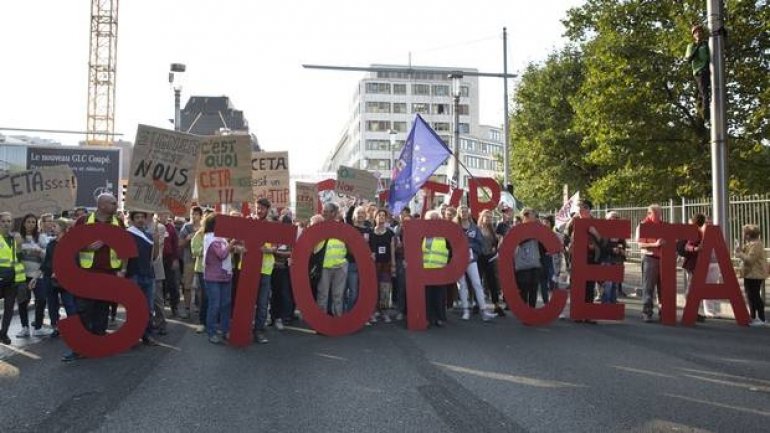 Activists in the Netherlands have gathered almost two-thirds of the signatures needed to lay the groundwork for a referendum on Europe’s free trade deal with Canada, which they say overly favors the interests of multinational companies, reports The Guardian.

The Dutch have twice voted down European Union initiatives in referendums, scuppering a proposed EU constitution in 2005 and in April throwing into disarray plans for closer EU relations with Ukraine.

Over the past year, the activists have gathered the names of almost 200,000 supporters who have pledged to petition for a referendum on the EU-Canada Comprehensive Economic and Trade Agreement (Ceta) once the Dutch parliament has ratified it.

Under Dutch law, 300,000 signatures are enough to trigger an advisory vote on any bill passed by parliament. If voters reject the bill and turnout tops 30%, the government needs the consent of parliament to proceed, possibly by offering concessions or amendments to reflect the popular will.

A referendum defeat would throw up a further obstacle to the ratification of Ceta, which was almost scuttled last month by a regional assembly in neighboring Belgium.

Activists have criticized Ceta and TTIP, a planned EU-US equivalent, for lacking transparency and giving undue influence to closed arbitration tribunals they say could be abused by multinationals to dictate public policy.

A motley group of campaigners – members include organisations like “More Democracy” and “Pigs in Need” – highlights concerns ranging from the claimed impact of Ceta on labor rights and environmental standards to animal welfare.

“TTIP and Ceta are old-school trade agreements where the interests of companies are more important than the people who live in those countries,” said Niesco Dubbelboer, one of the leaders behind the referendum initiative.

Advocates of TTIP and Ceta say they will spur economic growth and raise standards of living.

The petition can only be launched once parliament has ratified the deal, something that is not expected before parliamentary elections due in March.

The EU and Canada signed Ceta on Sunday though it must still clear some 40 national and regional parliaments in Europe in the coming years to enter fully into force.

A defeat of Ceta in the Netherlands would deepen doubt over the ability of an unwieldy EU to negotiate deals on behalf of member states. In April, the Dutch voted “no” to an EU treaty on closer political, military and trade relations with Ukraine.

The Netherlands is the only EU state that has yet to ratify that deal, which was designed to bring the bloc’s giant eastern neighbor out of Russia’s orbit but is seen by many Dutch as failing to guarantee that the EU will have no security or financial obligations to Ukraine.

EU deals with foreign countries need the unanimous support of its 28 member states.