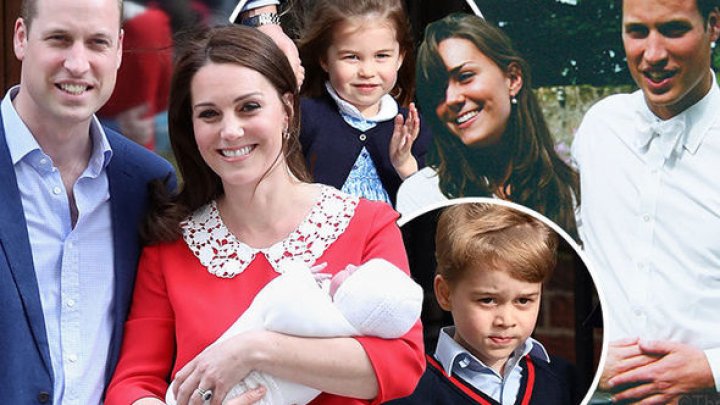 KATE, the Duchess of Cambridge, and Prince William will mark their seventh wedding anniversary today and this year there is a lot to celebrate as the royal couple enter seven years of marriage as a family of five, writes express.co.uk.

The couple wed on April 29, 2011 and anniversary celebrations are sure to be low key as the day falls just a week after Kate and William welcomed their third child, a baby boy, into the world on St George’s Day, weighing 8lb 7oz.

Now the hands-on parents of a growing brood, with three children under the age of five, the Duke and Duchess of Cambridge have come along way since they were fresh-faced students at St Andrews University in Scotland.

It was the love story of dreams - a young handsome prince, destined to be king one day, in love with a beautiful girl from an ordinary, middle-class background.

The couple’s first meeting at St Andrews, where they were both studying Art History, marked the start of a blossoming romance.

After starting out as friends, the pair moved into a house together with two other friends in 2002.

But their relationship soon became public in 2004 when they were pictured skiing together in Klosters, Switzerland.

And engagement rumours soon began to swirl when the then-Kate Middleton was spotted kissing Prince William on the slopes as the pair enjoyed another Klosters holiday in 2006.

However there was a brief separation in 2007 when the pressure of William’s life in the armed forces took its toll on their relationship.

But the pair were soon back together again as if nothing happened and from 2007, Kate appeared at a number of high-profile events alongside her prince, including the Princes’ Concert for Diana, where she was a VIP guest in the royal box.

The nation rejoiced when they announced their engagement in November 2010, with William proposing to Kate with a beautiful 12-carat sapphire ring, which had once belonged to his late mother, Princess Diana.

Speaking of the engagement in Kenya during their first interview together, Kate said: "It was a total shock when it came. There’s a true romantic in there."

Just five months later the couple were married in a spectacular wedding ceremony at the Westminster Abbey on April 29, 2011 and became the Duke and Duchess of Cambridge - a wedding present from the Queen.

William and Kate enjoyed more than a year as man and wife before they announced they were expecting their first child.

Royal fans were delighted at the news revealed early in December 2012 as the Duchess struggled with crippling morning sickness.

It is obvious to see how much Kate and William enjoy parenthood so it was no surprise when on September 8, 2014, they announced they were expecting their second child in the coming spring.

A princess was welcomed into the world on May 2, 2015 as Charlotte Cambridge.

And for their first royal tour as a family of four, the couple visited Canada in 2016, where an adorable Prince George and Princess Charlotte charmed the world with their outgoing personalities.

As Kate and Prince William, today, approach seven years of marriage, they will no doubt be looking forward to the future as a family of five after they welcomed their third child into the world this week.

Prince Louis arrived on St George’s Day, weighing 8lbs 7oz, and was quickly welcomed into the family by his adorable brother and sister.

To mark the anniversary, royal expert, Richard Fitzwilliams told Express.co.uk: "William's marriage to Kate which celebrates its seventh anniversary is truly, as Shakespeare's sonnet has it, 'the marriage of true minds'."

Writing for William and Catherine: A Family Portrait, she added: “The Duke and Duchess of Cambridge are a perfect match and prove that one’s origins do not matter when love is involved.

“William’s good looks, boyish charm and self-deprecating sense of humour, twinned with Catherine’s natural beauty and style, and her outgoing personality, generate an impression of modern royalty that is a winning combination of star quality and an approachable, common touch.”