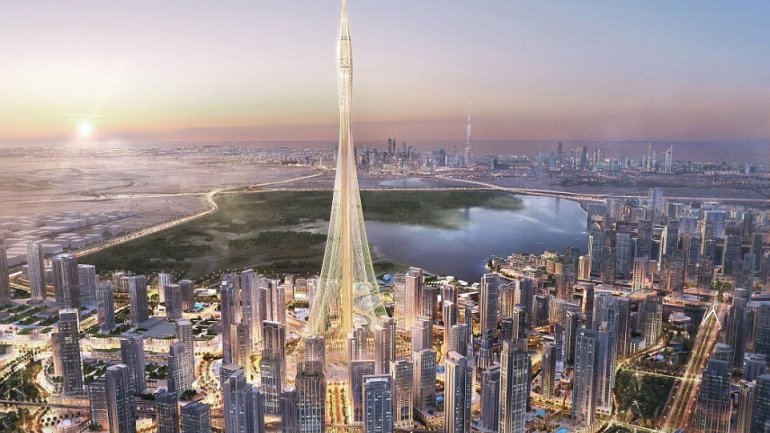 Dubai has started construction of a skyscraper that will reach even greater heights than the Burj Khalifa, which is currently the world's tallest building, reports Daily Mail.

The Tower at Dubai Creek Harbour will cost around $1billion to build and will offer 360 degree views of the city.

A statement issued at the groundbreaking ceremony said the structure 'will be the world's tallest tower when completed in 2020'.

The Gulf emirate's ruler, Sheikh Mohammed bin Rashid al-Maktoum, marked the groundbreaking as construction workers laid foundations for the skyscraper at a vast patch of sand on Monday.

Dubai's property developer giant, Emaar Properties, announced plans to build the viewing tower in April, saying it will be 'a notch' higher than Burj Khalifa, which stands 828m high.

However, the company has not revealed the exact final height of the tower.

Emaar Properties said in April that the structure will cost around $1billion to construct.

The tower will have observation decks providing 360-degree views of the coastal city and is located near Ras Al Khor National Wildlife Sanctuary according to Emirates 247.

It will be slender, evoking the image of a minaret, and will be anchored to the ground with sturdy cables

The designs have been envisioned by Spanish-Swiss architect Santiago Calatrava Valls.

Valencia-born Calatrava is known for his futuristic designs - in particular, the city of arts and sciences in his home city.

Emaar's Chairman Mohamed Alabbar said the tower will be completed before the Expo 2020 trade fair, which Dubai is preparing to host.

Dubai has established a reputation for building dozens of futuristic skyscrapers, which have transformed its skyline.

However, the emirate is not the only ones planning to top the world record for high rises.

Saudi Arabia's Kingdom Holding is building a tower in Jeddah that is planned to surpass the Burj Khalifa, rising to more than a kilometre above ground.