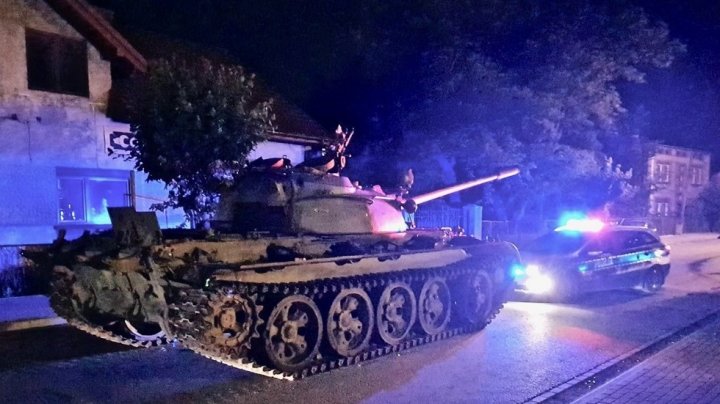 Police in central Poland responded to a late evening call over an incident that surely sent chills down the spines of Russophobe conspiracy theorists: a T-55 tank rampaging down the main street, reports RT.

When police arrived at the scene in the town of Pajeczno on Thursday night, they found the Soviet-era tank casually parked on a central roadway with its two occupants nearby, one of whom was an intoxicated 49-year-old man who had been in the driver seat.

Just another day in Poland: drunken man drives tank in a small town of Pajeczno https://t.co/C0VPyV0hY1

As it turns out, he had been authorized to drive the vehicle – although his superiors presumably only wanted him to move it off and on the damaged trailer on which it was being transported, rather than driving it through the city center. They also likely expected him to remain sober while operating the 36-ton armored combat vehicle. To make matters worse, local media report that there was no insurance policy on the tank.

Police were unable to get the tank off the street and onto a trailer until 5am.

The bulletproof joyride could cost the driver two years behind bars for driving under the influence, and up to eight years for creating a dangerous situation, although there are no reports of anything being destroyed or run over during the escapade.

On Twitter, quite a number of people commented that the incident had a striking similarity to the newer installments of the popular game ‘Grand Theft Auto,’ only with a distinctively Polish twist.

Another person suggested that the driver’s drunken state may have resulted in some geographical, and perhaps, historical confusion.

A drunk 49-year-old man was arrested last night after being found driving a 36-tonne Soviet T-55 tank through the streets of the small town of Pajęczno.

The tank has now been impounded by the police https://t.co/GLXfQOmvmm

While the idea of an actual Russian tank attack in our day and age would seem laughable to most, that certainly isn’t the point of view of the current government in Warsaw. On Thursday, Polish President Andrzej Duda cited a litany of historical grievances against Russia while signing a massive new defense deal with the US.