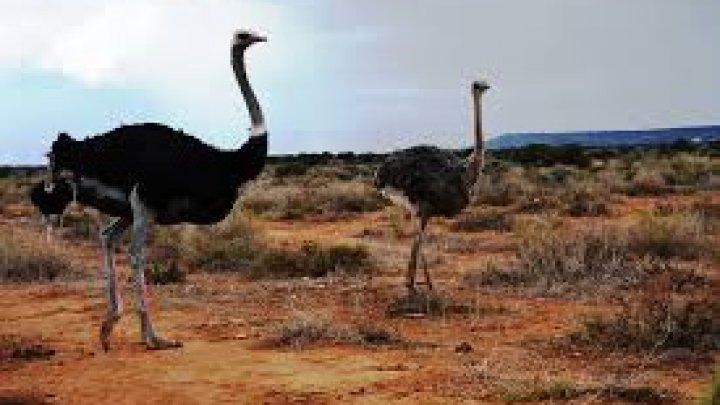 Heads held high and their beaks open, these ostriches are trying to stay cool.

Oudtshoorn in the Western Cape's Klein Karoo, boasts one of the world's largest ostrich populations.

With not a single cloud in the sky, ostrich farmers are worried about the climate conditions.

Rudy Potgieter has been farming ostrich for over 30 years.

As the months go by without any sight of rain he wonders if the farm will continue to be profitable.

"The farmers are struggling in this area, and that you can see by the decline on the amount of people in the industry, as well as the amount that has been slaughtered during each year. There has been a nose dive in those quantities. Normally we were slaughtering about 240,000 (ostriches) and this year I don't think we will slaughter 120,000. So it's 50% off, from the normal average, and it's about 30% down from last year."

Dams, rivers and irrigation feeders have been empty for some time.

Another big expense is the importing of food for their animals from nearby provinces, as well as water to sustain life on their farms.

"It's low profit margins, we are facing or we are dealing with the worst drought, as I said. in 300 years. So there is no food, there is no water. The two the dams Stompdrift and Kammanassie have like three percent and four percent of water."

Keller also plants lucerne (alfalfa) to feed his ostriches. But he says there's a huge shortage of the plants.

"Some of our fields, which we irrigated in November 2017, it's a long time ago and it is still a wonder that we have lucerne plants left, because as you see when you drive through these fields, that a lot of the Lucerne died in the circumstances that we are facing now."

It's a barren landscape - with only a few lucerne plants left standing in the cracked soil.

Some believe that the community has lost almost a billion Rand (ZAR) (70 million USD), after heading into the fourth year of harsh drought conditions.

"We farm in a desert area, the Klein Karoo, which is also one of the major ostrich production areas of South Africa, and in the world of course. There's low rain fall, but over the past 5 years the rainfall has been very erratic and very low, so all our dams feeding the irrigation schemes along the river have dried up. And the farmers have not been able to produce feed or fodder for the ostriches. So our challenge now is that it is expensive to buy in feed from out lying areas from the irrigations schemes up north, and to feed the ostriches."

Oudtshoorn was recently placed under level 4 water restrictions, limiting individual households to 12 kilolitres a month. The Oudtshoorn Municipality believes that if there's no rainfall it will only have enough water to last until May (2019).

Olivier explains, "What is really happening is that the farmers are only being able to feed them for a shorter period and not necessarily twelve months maybe, but less, ten months, and then they will also be processed after ten months of age, and not usually a little bit older age."

As the municipality starts to drill boreholes in Oudtshoorn, farmers are still not at ease, as much of their farming water comes from rivers and irrigation dams built previously.

For now these ostriches take sanctuary in the somewhat cooler early morning sun.