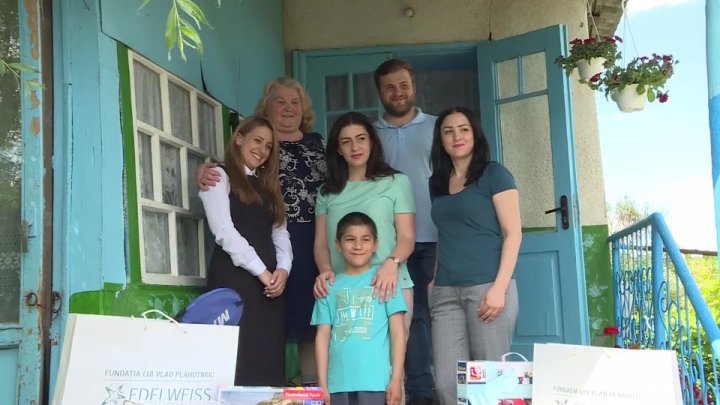 Dreams come true. This is what demonstrates again Vlad Plahotniuc's Foundation "Edelweiss", that wanted to cheer up a boy, forgotten by his biological mother. Ilie is lucky enough to be cared by a woman and to call mer "mother". She also wanted him to be happy and wrote a letter to the fundation, in which she requested what her boy wanted the most - a bicycle. Yesterday, "Edelweiss" team visited them.

7 years ago, Claudia Cojocari decided to take under custody Ilies Hacina, a three-year-old orphan boy after his mother left him and went to Russia.

"-He is allergic and asthmatic. We've been through trouble. Now he is better.
-How do you get along with Ilies?
-Wondreful, he is a such a precious boy. Is a good householder, helps me anytime I need", said Claudia Cojocari, Niculaieuca villager.

"His mother was visiting him every three months, now once a year. She didn't even call him on holidays or on his birthday", said Claudia.

"We brought you more presents, but we knew from your mother that you always wanted a bike, so we brought you one".

The raising mom had a surprise too. For less household chores, she got a new washing machine.

"Thank you a lot. Your gesture means a lor to us. I always wanted a washing machine, but got it at my 55 year anniversary", said Claudia.

"It's worth appreciation that Mrs. Claudia tries to supply Ilies his lack of parental care. She demonstrates us that there are no stranger children", declared Lidia Cucos, executive director of Vlad Plahotniuc's Foundation "Edelweiss".