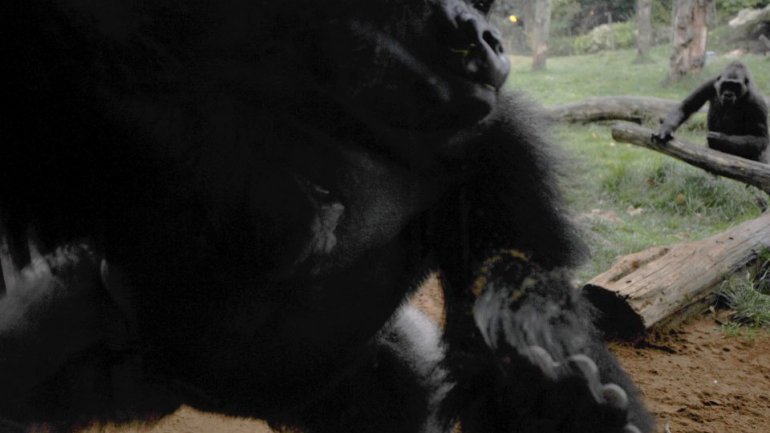 Dramatic footage obtained by the MailOnline shows the furious beast smash his full body weight against the glass – inches from where zoo-goers are standing, theSun informs.

Kumbuka was on the loose for at least 90 minutes after escaping last night.

Armed cops and zoo-keepers eventually shot him with a tranquilliser dart — as terrified visitors hid in a cafe and other enclosures.

One zoo worker said: “He’s a total psycho, that ape.”

Visitors told of their terror as they learned the “psycho” 7ft gorilla was on the loose at London Zoo.

Jonny Briers, 22, said an alarm went off moments after he witnessed the 29st ape charge at the glass in its enclosure.

Jonny, of Tooting, South London said: “It didn’t break it — we saw it do it earlier in the day as well.

The silverback male called Kumbuka escaped from his enclosure in Gorilla Kingdom at 5.15pm.

Earlier the public were urged “to get away from the window” and not to make eye contact with him.

Oliver Barker, 24, said Kumbuka had seemed “agitated” and keepers had told visitors not to stare at him.

He added: “He wasn’t relaxed at all. He looked very intimidating.”

A zoo worker, who did not want to be named, said: “He’s a f*****g psycho, that ape. He’s smacked the enclosure glass a couple of times.”

Hundreds of visitors were forced to shelter in a cafe and other en­closures as armed police and zookeepers hunted the gorilla.

Kumbuka was shot with a tranquilliser dart after about 90 minutes.