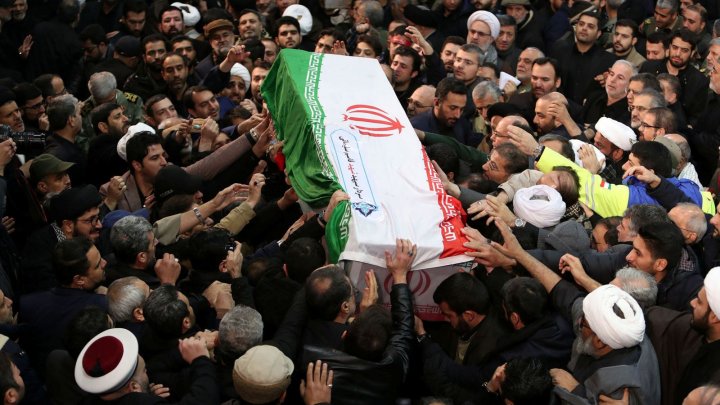 Dozens of mourners have been killed during a stampede for the general killed in a US airstrike, according to Iranian state TV, quoted Independent.

It reported that 35 people had been killed and at least 48 injiured during the incident on Tuesday happened in Qassem Soleimani’s hometown of Kerman, in southeastern Iran.

The TV quoted the head of Iran's emergency medical services, Pirhossein Koulivand, saying there had been people injured and killed.
A procession in Tehran on Monday drew over 1 million people in the Iranian capital, crowding both main thoroughfares and side streets.
Thousands of people have taken to the streets for the funeral procession of Qassem Soleimani, who was killed in a US airstrike near Baghdad airport on Friday.
Major General Soleimani will be buried in a "martyrs' cemetery" in his home town Kerman, writes skynews.

The ceremony is taking place as a top Iranian security official said Tehran is considering 13 "revenge scenarios" after the drone strike on the general, according to the semi-official Fars news agency.

Ali Shamkhani, secretary of the Supreme National Security Council of Iran, said: "The Americans should know that until now 13 revenge scenarios have been discussed in the council and even if there is consensus on the weakest scenario carrying it out can be a historic nightmare for the Americans."

Meanwhile, a senior Iranian official has said the country is "ready to come back to full compliance" in the nuclear agreement it has with a group of world powers.