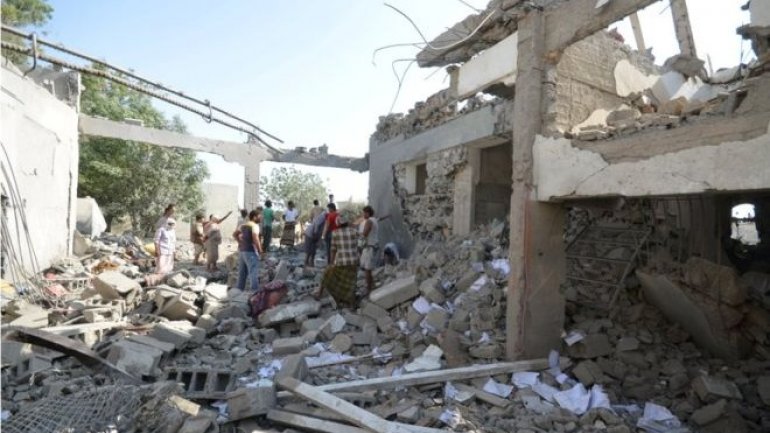 Dozens of people have been killed at a Yemeni prison complex in air strikes by the Saudi-led coalition, reports BBC.

Strikes hit a building used as a prison in the al-Zaydiya security headquarters in the western port of Hudaydah, security and medical officials say.

The city is under the control of Houthi rebels, who have been battling the government since 2014.

Rebels and inmates were among the 60 dead, officials said. Dozens more are believed to have been wounded.

The prison was holding 84 inmates when it was hit three times late on Saturday, reports said. Pictures from the scene showed badly wounded people being rushed to hospital.

The coalition, which backs Yemen's exiled President Abdrabbuh Mansour Hadi, has been criticized for the number of civilians killed in its air strikes.

But a coalition statement quoted by Reuters news agency suggested that the building was a legitimate target and said "targeting protocols and procedures were followed fully".

Earlier this month, at least 140 people were killed, most of them civilians, when planes bombed a funeral hall in Yemen's capital, Sanaa.

The coalition later blamed the attack on "bad information".

President Hadi, who lives in exile in the Saudi capital Riyadh, said the plan "rewards the coup leaders and punishes the Yemeni people at the same time".

Details of the peace "roadmap" have not been made public but are believed to give the rebels a share in any future government.

The plan is also believed to involve reducing some presidential powers in exchange for Houthis withdrawing from major cities.

The Shia Houthis seized the capital, Sanaa, in 2014. Much of the internationally-recognized government is now based in Yemen's second city of Aden.

The conflict escalated in March 2015 when the Saudi-led coalition launched an air campaign to try to push the rebels back.