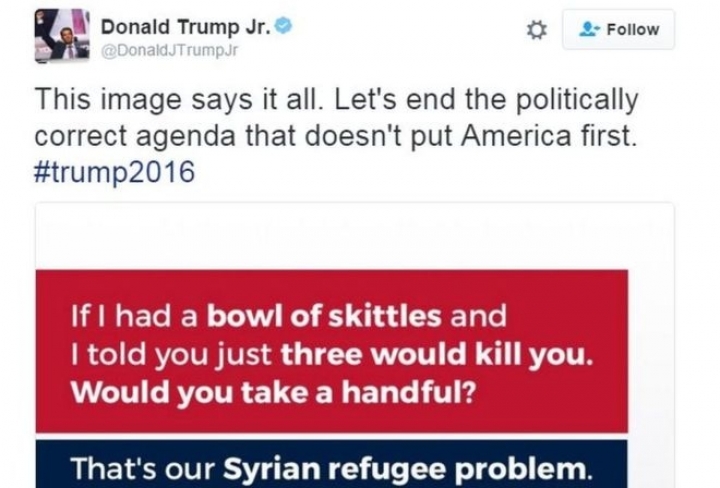 Trying to suggest the US should not accept any refugees, Donald Trump Jr asked the question:

"If I had a bowl of skittles and I told you just three would kill you, would you take a handful? That's our Syrian refugee problem."

He added: "This image says it all. Let's end the politically correct agenda that doesn't put America first."

The food analogy has been used before to imply that, if a few people in a group are bad, it would be dangerous to take a single one in.

The language in Donald Jr's tweet was used in a post by conservative radio host Joe Walsh in August.

But following tweet by the Republican presidential candidate's son, the company that owns Skittles, Wrigley, stepped in.

"We don't feel it is an appropriate analogy," she added. "We will respectfully refrain from further commentary as anything we say could be misinterpreted as marketing."

There has been no reaction from the campaigns of the main presidential candidates, Donald Trump and Hillary Clinton.

Angered by Donald Jr's statement, however, some people posted images of child refugees on their Twitter feeds.