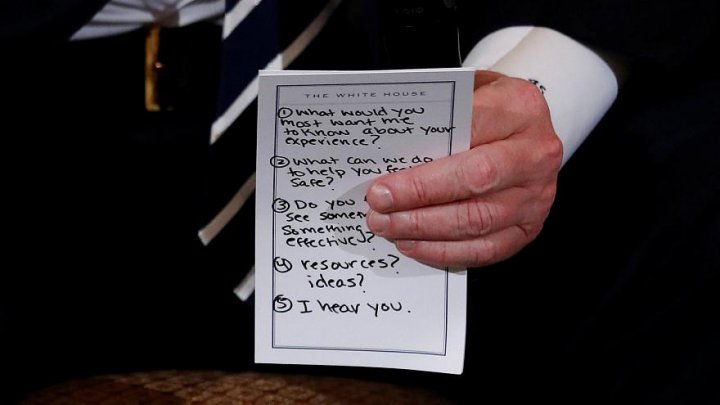 President Donald Trump is facing strong backlash after he exposed a cue card that reminded him to offer sympathy to the survivors and families of the Parkland, Florida, shooting massacre during a meeting at the White House, wrote euronews.com

The marked paper included phrases: “What can we do to make you feel safe?” and “I hear you”, prompting widespread criticism online.

X-Men actress and model Olivia Munn was among the critics, tweeting: “Really??? You have to be reminded to pretend to care?”

It was not immediately known who wrote the instructions on the cue card.

Survivors of the attack, including representatives of advocacy groups formed after the school shootings at Columbine High School and Sandy Hook, attended the listening session with Trump amid efforts to pressure the administration to tighten gun control laws in the United States.

A National School Walkout is also being planned for next month, while another demonstration dubbed “March For Our Lives”, which calls for an end to gun violence and safer schools, has been set for March 24 in Washington DC.