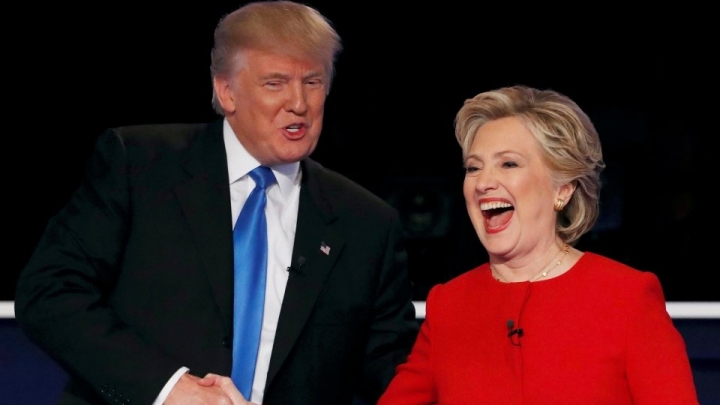 Donald Trump has told a crowd of 7,500 that he was holding back during the first presidential debate with Hillary Clinton because he did not want to embarrass her, reports The Guardian.

He insisted that every poll showed him winning the debates but cited only internet surveys to prove this; every scientific poll taken in the aftermath of the debate showed a majority of viewers believing the Democratic nominee had won.

The Republican nominee’s unhappiness with coverage of his widely panned performance showed. Three times in the course of a rally in Florida, Trump called out “the corrupt corporate media” and gestured towards his supporters to turn towards the press pen to boo, hiss and even, in one instance, shout “go to hell”.

Trump constantly revisited different moments in the debate and told of how, before taking the stage, “I took a deep breath and pretended I was talking to my family.” He recounted what he felt were his best lines during the debate – like, “You are experienced but it’s bad experience” – and touted how he had done well on the issue of trade and exposed Clinton’s “real positions” on Nafta, which he described as “the single worst deal you’ll ever see”.

He even criticised Lester Holt, the debate moderator, whom Trump described as “the emcee”, for challenging him when he praised stop and frisk, a controversial police tactic that involved New York police officers stopping pedestrians without a warrant, asking them questions and checking them for weapons. A federal judge ruled in 2013 that the practice was unconstitutional as it disproportionately targeted African Americans and Latinos. Trump insisted: “I also explained last night stop and frisk was constitutional. The emcee argued with me, taking up the time. Law enforcement does stop and frisk every day.”

Trump also re-litigated his false claim that he had opposed the Iraq war from the beginning, asking the crowd for approval. “And does everybody believe me, I was against going into Iraq?” he asked the crowd.

In contrast, Clinton took a far more jubilant tone on Tuesday, mocking Trump’s complaints about his microphone. “Anybody who complained about the microphone is not having a good night,” she told reporters on her plane.

Though Trump supporters in Florida responded with loud cheers when asked by state party chair Blaise Ingoglia who they thought won the debate, they were far more equivocal in one-on-one interviews.