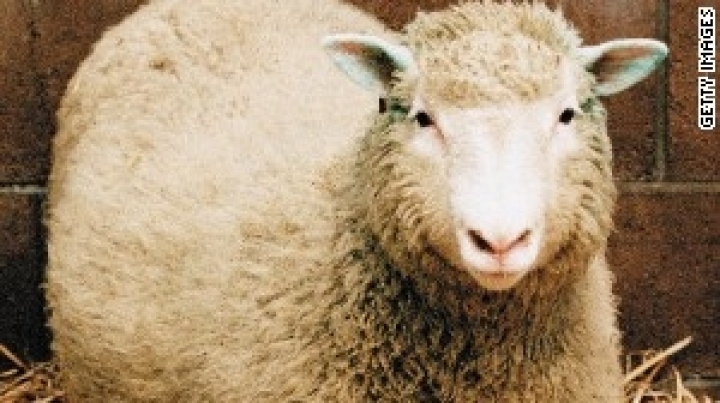 Though growing old, Dolly's sheep siblings are no worse for wear. Debbie, Denise, Dianna and Daisy, clones all derived from the same cell line as the first cloned mammal, show no signs of long-term health issues, according to research published Tuesday in the journal Nature Communications. The clones are, in fact, in vigorous good condition despite the fact that they range in age from 7 to 9, or about 60 to 70 in human years.

This happy news arrived just weeks after embryologists around the globe raised a glass for Dolly's 20th anniversary. Born July 5, 1996, Dolly resulted from an experiment performed at theRoslin Institute in Scotland led by Dr. Ian Wilmut.
Surprisingly, Wilmut and his team's primary intention wasn't to become the first scientists to clone a mammal. The group simply wanted to genetically modify the genes of sheep. Creating Dolly was a first experimental step toward learning to make a genetic "tweak."

Dolly the sheep was the world's first cloned mammal.
To create Dolly, the scientists performed a somatic cell nuclear transfer. They took a body cell (a mammary cell extracted from a 6-year-old ewe) and placed it in an ovum with a scooped-out nucleus. These two cells fused and developed into an embryo that ultimately developed into Dolly.

"We still know very little about the molecular players that are involved," said Jose Cibelli, a professor of animal biotechnology at Michigan State University. Cibelli was the first to clone a cow, which he did within a year of Dolly's birth.
Though more is known today, he explained, a number of things haven't been "quite figured out," and that's why the process is still inefficient.

"You need to put cloned embryos into 10 recipient cows in order to produce one live birth," he explained, for an efficiency rating of 10%. The ratio is about the same for sheep.
Regardless of poor efficiency and a fuzzy understanding, somatic cell nuclear transfer has been undertaken in more than 20 species of mammals to create clones, according to Kenneth Sinclair, lead author of the new study.

A professor of developmental biology at the University of Nottingham, Sinclair did not participate in the original experiment to create Dolly, and cloning is not his primary interest.

It turns out, he inherited the sister clones -- or "sestras," for fans of the sci-fi TV show "Orphan Black" -- along with nine other cloned offspring related to Dolly, from professor Keith Campbell. Now deceased, Campbell had worked with Wilmut at Roslin to create Dolly and continued his cloning research at the University of Nottingham.

Though higher than normal failures occur in early embryonic development, clones that get past the neonatal hump do well, by all accounts.

"We have data showing in multiple species that once an animal was born healthy, the animal would lead a normal life," Cibelli said.

Still, Dolly herself died prematurely of lung disease in 2003. Though the illness that did her in had nothing to do with her origins, healthy aging among clones is a contentious issue, Sinclair and his co-authors wrote. Much was made of the fact that she'd been suffering from osteoarthritis, a sign of premature aging.

Mindful of Campbell's legacy, Sinclair decided to assess the long-term health of the four most elderly members of his flock. And so the foster father measured the sheep's blood pressure, metabolism, heart function, blood glucose levels and insulin levels and x-rayed their muscles and joints, looking for signs of premature aging.

What did Sinclair discover? Mild osteoarthritis, nothing else. The four sheep are "remarkably healthy," Sinclair said in a university video, adding that he has no conflicts of interest and no agenda.

See the latest news and share your comments with CNN Health on Facebook andTwitter.
These days, science has moved on, according to Sinclair. The focus is now on stem cell science and reprogramming cells in efficient ways to achieve the benefits of regenerative medicine.

Cibelli believes that "we are on the verge of a breakthrough" with stem cell research and cloning research working synergistically.

Though somatic cell nuclear transfer has been used in humans, it has been performed only to generate stem cells, Sinclair said, adding that "there's nobody out there interested in generating clones of humans.", CNN reports.