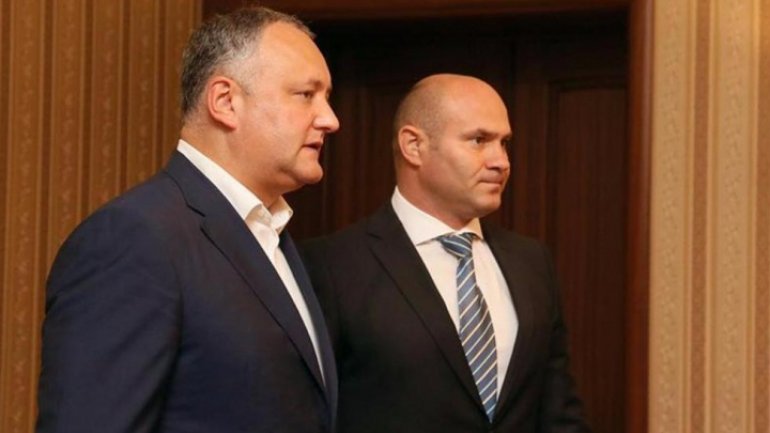 The law stipulates that police officers neither reserve the right to be party members nor to make propaganda in favor of political parties.

The head of the Tighina Police Inspectorate, Pavel Voicu, became the presidential adviser for special missions. The MIA official has been elected with this position after he started working with Igor Dodon earlier this month on Mount Athos.

In Greece, he was surprised by the head of state dressing in a shirt with the insignia of a campaign previously launched by the socialists. On this case, the Internal Protection Service of the MIA initiated a service inquiry.

The law clearly stipulates that police officers neither reserve the right to be party members nor to make propaganda in favor of political parties.

Pavel Voicu was to be heard today by the Internal Protection Service of the MIA, but the investigation was suspended because he resigned.

"Mr. Voicu has filed a request for resignation on his own initiative. On August 22, the PGI order on the interruption of service relations came into force, so it is inappropriate to conduct the service investigation, "said SPIA press officer Alexandru Tudos.

Initially, Pavel Voicu told us he would comment on this case. Later, the new presidential adviser changed his mind and told us to contact the presidential press service. On the other hand, Igor Dodon said that Pavel Voicu had extensive experience in the legal structures and he gain the ability to anticipate various challenges to the country's security.

Pavel Voicu graduated from the Police Academy "Stefan cel Mare" of the MAI and the Academy of Public Administration. Since 1995 he has held various positions within the Ungheni Police Inspectorate and the National Anticorruption Center.

Pavel Voicu came to public attention following the April 7, 2009 violence. The press wrote that, being Commissioner of the Botanica sector, he would have been involved in the retention, mistreatment and torture of young people.

However, he denied all the facts.