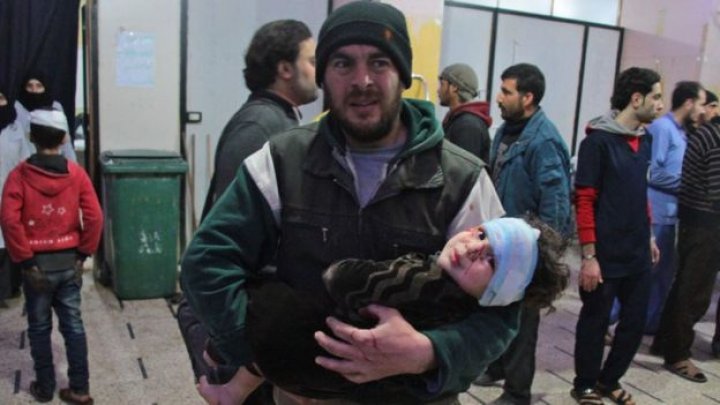 A doctor working in the Syrian rebel enclave of the Eastern Ghouta says the situation is "catastrophic" - and he believes the international community has abandoned the people living there.

Three days of bombing in the area reportedly killed at least 250 people.

The Syrian military says it is trying to liberate the area from terrorists - but it has also been accused of targeting civilians.

"They targeted everything: shops, markets, hospitals, schools, mosques, everything," Dr Bassam said. "I will treat someone - and after a day or two they come again, injured again."

"Where is the international community, where is the UN Security Council... they abandoned us. They leave us to be killed," he said.

More than 50 children were among the dead, according to activists. About 1,200 people were injured.

The UN has called for a ceasefire to allow humanitarian aid to be delivered and the wounded to be evacuated.

The Eastern Ghouta is dominated by the Islamist faction Jaysh al-Islam. But Hayat Tahrir al-Sham, a jihadist alliance led by al-Qaeda's former affiliate in Syria, also has a presence there.

Syrian state television reported that at least six people living in government-controlled areas of eastern Damascus were killed earlier this week - and 28 others wounded - by shells fired from the Eastern Ghouta.

The Syrian military said it carried out "precision strikes" on areas from which the shells were launched.