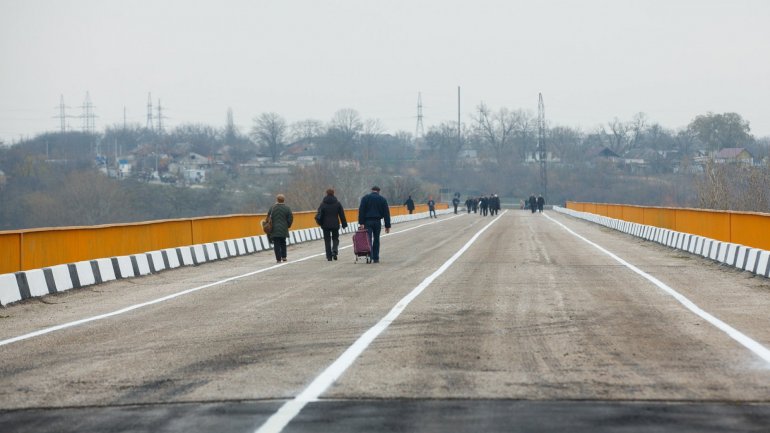 Dniester bridge that ties Gura Bâcului and Bâcioc villages, was reopened todays after a 25 years break. The ceremony was attended by Prime Minister Pavel Filip and Tiraspol's leader Vadim Krasnoselski. The two have mentioned that it is an important stop not only for people, but also relations between Chişinău and Tiraspol.

"Beside our main aim to eliminate the barrier between Moldova and Transnistria, regarding free movement of people and goods, it will also develop the economy" Pavel Filip mentioned.

"This bridge not only connects the left and right river banks, but also the logistics and economy. It is important for economic agents, as well as citizens. We spoke with those from Bâcioc and Parcani. Everyone is happy" Vadim Krasnoselski declared.

The traffic on the bridge will be supervised for any breaches.

"On both ends are placed customs points. It will depend much on the amount of traffic that will be formed here. It has been discussed to reduce, or eliminate altogether the excessive controls and restrictions upon those who wish to cross, as it is done at other points. Essentially we must eliminate smuggling and other negative aspects that might arise" Deputy Prime Minister for Reintegration Gheorghe Bălan said.

After reopening the bridge, people living in nearby Dniester will have their road cut out for arriving to their destination:

"It is amazing, the two banks of Dniester are tied. We are from Chisinau, but our parents were born in Transnistria, therefore we took our children with us today to go home. Earlier, we had to go to Bender or Grigoriopol, making the road 30 km more than now."

"It is easier, we no longer need to go around so much, it will bring a lot of benefits."

"We live in Gura Bâcului, there are 3 of us an we wish to try it out and see, but it is a great plus for us. Gura Bâcului village will have more visitor, we will be able to open a market as it is done at other crossing points."

A document to reopen the bridge was signed two weeks ago.