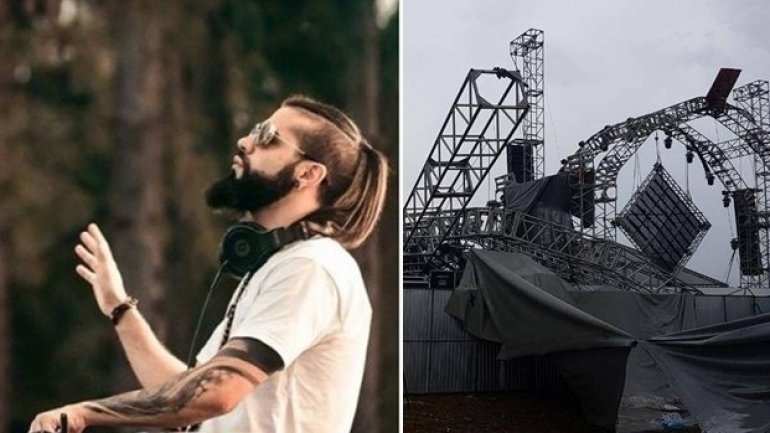 A DJ has been killed after part of a stage collapsed during a packed music festival in Brazil.

Three others were injured when the set came down at the packed Atmosphere Festival in Esteio near the southern city of Porto Alegre.

Revellers filming the party scene captured the tragic moment the metal structure over the stage came down during a storm.

DJ Kaleb Freitas, who was performing at the time, was rushed to hospital critically injured after suffering head injuries but died soon after arrival.

An investigation has now been launched into the the tragedy at the rave-style event, which went ahead despite severe weather warnings about heavy wind, hail and torrential rain.

The stage collapse has been blamed on the adverse weather conditions.

Friends of the performer, a 30-year-old who lived in Porto Alegre and whose real name is Kalleby Freitas da Rosa, took to Facebook today to pay tribute to the musician.

Kaka Guimaraes wrote: “You were a person of great light and your smile charmed many people.

"I told you that less than three weeks ago and be assured we will always remember you with a huge smile on your face.

“You were a spectacular man. Your smile represented peace. No-one dies while they remain in peoples’ hearts.”

The tragedy struck at around 2pm yesterday local time.

Footage showed revellers were dressed for summer despite the howling gale blowing and cloudy skies - and many appeared unaware tragedy had struck as they joked about the stage coming down over the sound of the music after filming the dramatic moment.

Around 5,000 people were at the event around the time of the accident, which provoked a stampede near the stage as revellers fled en masse.

Sergio Bandoca, one of the people in charge of the exhibition centre where the rave took place, said: “It was madness.

"The scale of the tragedy could have been far worse. Things were flying all over the place. There was panic.”

Officials said festival organisers Rave Atmosphere had the correct permits to stage the event and all their paperwork was in order.

A spokesman for the firm said they would assist investigators in getting to the bottom of what happened, adding: “We’s devastated, we lost a friend, an artist.