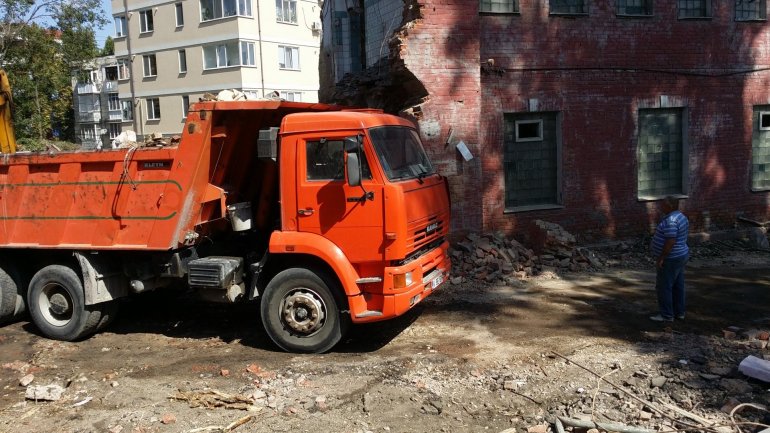 A company from the Capital wishes to build a new apartment block in place of a public bath Grigore Alexandrescu Street.

The demolition of the old public bath house displeases the residents. Now the old building is nothing more but a memory.

The public bath from Grigore Alexandrescu Street opened its doors for the public back in 1980. The building became, along with other bath houses, private property by the end of 90'. For years nothing changed in the building, even the price remained accessible for general public, of 50 lei.

"I remember how we used to go there whenever we needed a bath. The condition were good, like in any other public bath", a man said.

In August 2017 a company has received authorization to demolish the old building. In it's place a new apartment block, with a maximum of 10 floors, will be build.

Only that his factor disturbs the residents:

"When the demolishing begun, the whole building was shaking. The whole house leaned to a side, even the entrance is not as tall as it used to be."

Representatives from the Center for Architecture, Urbanism and Infrastructure of Chisinau stated that the company has all the necessary documents to perform the work, everything is fully legal. After the demolish is done, according to the legislation, the company has to request and attain a permit before building the new apartment block.

"According to the papers, the company has the right to demolish the old building, but it has yet to receive the permission to build something in its place. Unfortunately, in Chisinau there are many construction sites that lack the proper papers allowing them to perform the work" deputy chief of the Center for Architecture, Urbanism and Infrastructure, Alexei Ţurcan said.

Back in Soviet Union, seven public baths were opened all over Chisinau. People could enjoy a nice shower all day long for only 10 coins, while for 20 coins they could even use a hot bath.