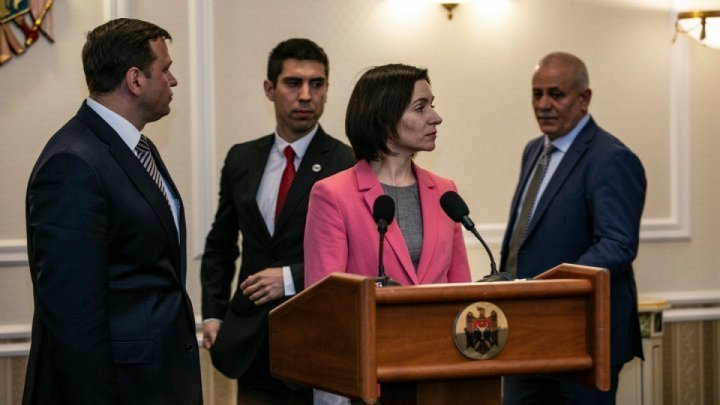 An audio recording of a discussion between PAS and Platform DA before they joined the coalition with PSRM in 2019 has somehow leaked out. Acccordingly, the audio shows that Maia Sandu's party opted for an alliance with the Socialists and insisted that important state institutions be handed over to them.

Representatives of both parties have confirmed the veracity of the recording, but say they do not know how the word got out.

An anonymous account sent this recording to our TV station.

The voices resemble those of PAS representatives, Maia Sandu, Sergiu Litvinenco, Dan Perciun, and those of the DA Platform, Andrei Năstase, Alexandru Slusari and Iurie Reniță. The discussion would have taken place on June 7, 2019 and focused on the possibility of forming an alliance with the Socialists.

"Dan Perciun: Don't be upset. In today's discussion, the socialists seemed constructive to me, honestly.

Alexandru Slusari: If they had wanted to come to the talks, what would have confused them to come yesterday, today ".

At that moment, the PAS leader, Maia Sandu, intervenes, warning the DA deputies that she will complain to the officials from Brussels.

"Maia Sandu: It's clear that you do not want to sign. I will go and tell Brussels, because they are waiting for that.

Alexandru Slusari: I really don't understand your despair. In desperation, the biggest mistakes are made.

Andrei Năstase: But who are your partners, the socialists or us? "

According to the recording, the representatives of the ACUM bloc also discussed the surrender of some ministries and force structures. The DA platform would have opposed the SIS becoming subordinate to President Igor Dodon.

"Iurie Reniță: It goes under the subordination of the president, here is the danger. He revives all the KGB structures in a year.

Iurie Reniță: And at SIS.

Mihai Popșoi: Ciocoi is accepted by the whole international community.

Iurie Reniță: It is not, it definitely is not ".

The deputy of the DA Platform, Iurie Reniță, confirmed the veracity of the audio recording.

"I confirm that such a discussion took place. We should have been much more consistent and not given in ", said Iurie Reniță.

We tried to get a comment from the PAS president, Maia Sandu, but she did not answer the phone.

Instead, the PAS deputy, Sergiu Litvinenco, wrote on Facebook that the summer of 2019 was a difficult period and thanked his colleagues from the DA Platform for managing to overcome the fear.

We also tried to get a comment from Andrei Năstase. Initially, the politician asked us to send him the audio recording, later he did not answer our calls.

Nastase posted a video on Facebook in which he says that the audio recording that appeared in the public space is incomplete and points the finger at those in PAS.

"Those who give us advice, free and naughty lessons today have certain imaginable fears should review their allegations," said Andrei Nastase.

I also asked for a reaction from the Presidency. The spokesperson of the institution, Carmena Sterpu, did not answer the phone.

On June 7, 2019, when the legal term for the formation of a parliamentary majority and a new Government expired, the Socialists and representatives of PAS and the DA Platform sat at the negotiating table, at night, away from the eyes of the press.

The next day, on June 8, PAS, DA and PSRM announced the signing of a temporary agreement that formed the basis for the formation of the alliance. Subsequently, the State Protection and Guard Service came under the subordination of the country's president, who obtained by law the possibility to appoint and dismiss the director and deputy director of SIS.