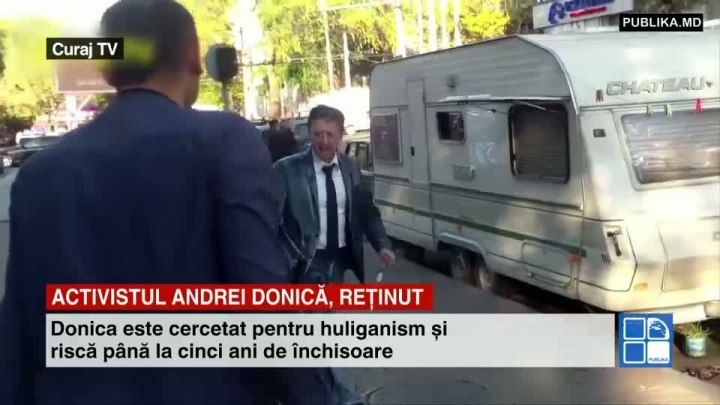 Andrei Donica, one of the active participants in demonstrations organized by the "Dignity and Truth"party, behing which stay fugitives Victor and Viorel Topa, was detained by police for hooliganism.

He soaked with milk the Finance Minister, Octavian Armaşu in the street.

It all happened near the government building in front of the unauthorized caravans located at the corner of Pushkin street and the Boulevard Stefan cel Mare.

Donica was sneaking and soaked milk Octavian Armaşu with milk, then left. The minister complained to police, and several hours after the incident, he was arrested.

"I noticed the message about the incident that occurred. We received a request from the minister. We provide signs of criminal hooliganism composition. A criminal case was initiated" , said PGI chief, Alexander Pânzari.

Andrei Donica was often seen there, giving instructions to several participants in the unauthorized protest. To further prevent such incidents, the police decided to evacuate the caravans.

Under the Criminal Code, hooliganism is punishable by a fine of 4,000 to 14,000 lei or unpaid community service for 180 to 240 hours or by imprisonment of up to three years.

According to information held by police, the suspect is not the first deviation of the law. Previously, he was detained and investigated for the circulation of drugs, but also for making and selling of fake stamps.

The witnesses of the incidend have said that donica behaved strangely, the police asked to accept a narcological testing, but the suspect refused.