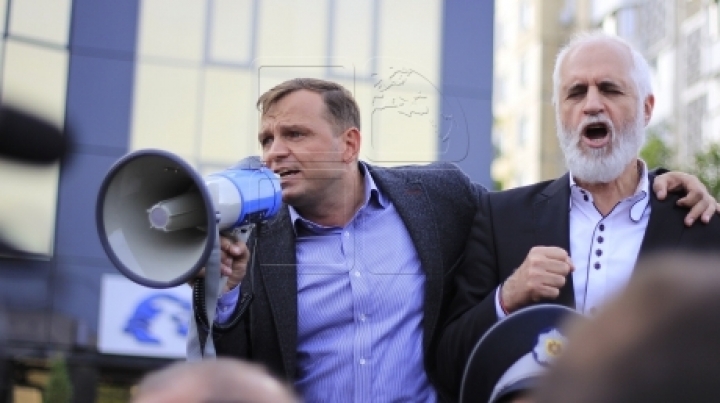 "Dignity and Truth" party behind which stay mobsters Topa and pro-russian party led by Renato Usatii's power decrease day by day. They could undertake actions to diminish the situation in Moldova, because they are losing ground. The statement was made by "Fabrika" show guests last night.

Analysts invited to Publika TV channel last night believe fewer citizens trust that the promises of those who organize protests will come true.

"The force of the protest decreases. Why? For the simple reason that the Government began doing real things, I don't want to praise the government, but things are being done and therefore the trust increases" , mentioned journalist, Voictor Nichitus.

"Although I notice that protest intensity falls, I believe the possibility of destabilization is real. Why do I think so? Because some political forces have reached the lows of despair, they are losing ground and I refer to "Dignity and Truth"platform and political forces led by Renato Usatîi, who might wantto engage in dangerous protest actions" , said political analyst, Corneliu Ciurea.

"Fabirka" show guests stated that the only purpose of the "Dignity and Truth" Party behind which stay Topa mobsters and the party led by Renato Usatîi is getting power by any means. Therefore, the state institutions should be prepared to deal with possible violent actions."

"They are the same actors. Do you think from Nastase to Anca to Anisoara, or how do you say it, is casual? No. They are grandchildren of activists of another level. They're all the same actors and everyone wants to destabilize the situation in Moldova" , said Deputy Minister of Interior, Ghenadie Cosovan.

"We have to face several politico-criminal groups in full meaning of the word, who want political power by all means. By election, destabilization, and such actions are intended to show the low capacity of state institutions to deal with vulnerabilities risks in important moments" , said political analyst Victor Gurau.

Independence Day celebrations were overshadowed by "Dignity and Truth" activists and supporters of Renato Usatîi. People who came to see the military parade in the Grand National Assembly.