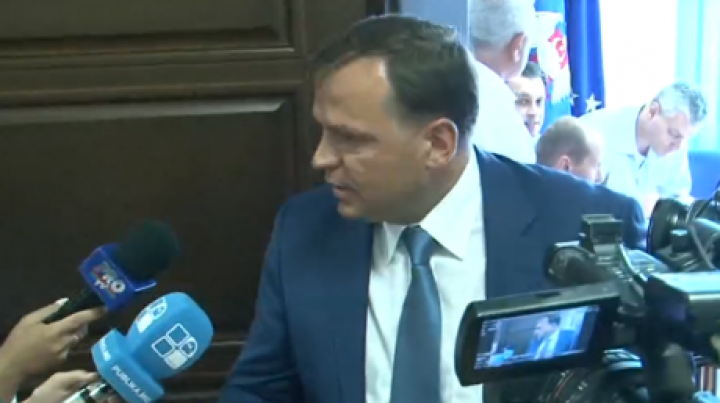 "Dignity and Truth" party leader, Andrei Nastase was caught lying again. It all happened at the headquarters of the Central Election Commission, when he brought the signatures for registration in the presidential race.

The wedding godson of Victor Topa mobster lied that the Democratic Party has submitted 16,000 signatures and not 29,000, and later got angry on journalists who have tried to correct him.

Andrei Nastase knowingly is manipulating the information on the number of subscription lists, submitted to the CEC by the Democratic Party. Even if he was corrected several times, Nastase continued to lie, moreover, tried to intimidate the reporter.

"Yesterday they said that Lupu would have submitted 29,000 signatures, and today CEC actually declares that 16,000 were filed.

- You are Lupu's lawyer or what?

- No, I read the press release from the CEC.

- Miss, you intervened every time. Why?

- You should not misinforme", said Andrei Nastase.

Asked about the complaint of Sipoteni village citizens, Calarasi district, about some people's personal data found without their consent of the subscription lists of the "Dignity and Truth" Party of mobsters Topa, Nastase said that it's CEC's job to check everything.

"CEC can verify all the signatures and lists that we presented" , said Nastase.

Pretender to the position of head of state continues to avoid saying whether he paid taxes of 100,000 euros which was transferred to the accounts of his mother, without her even knowing it.

"- We want to ask whether you have paid tax on the sum of one hundred thousand euro transferred to the account of your mother?

- I am a man that works in private. I'm a man who never had the  duty to explain myself to anyone.

- You paid tax? That was the question.

- Miss, all institutions as CNA, Prosecutor Office or FISC have my personal data.

- In which country you paid? If you've paid?

- Miss, ask all institutions of law in the world. "

When leaving the CEC headquarters, the wedding godson of mobster Topa continued attacks on journalists, but they put him in check.