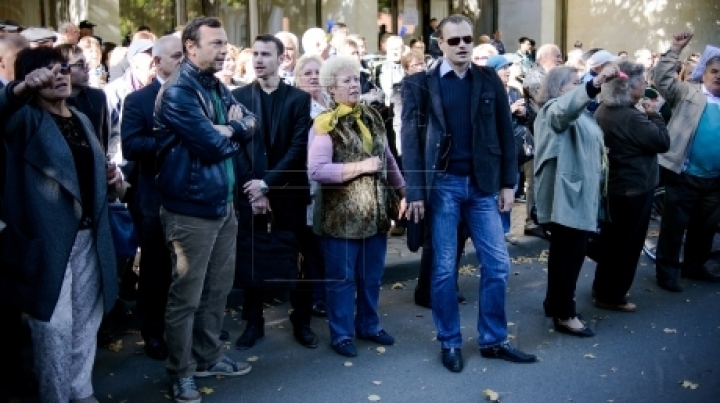 Five minutes. Andrei Nastase participated just for five minutes at the event organized today by the "Dignity and Truth" party, behind which sit Topa mobsters. The protest took place in front of the State Residence, in which the resignation of the head of the state was desired. Many dubious people with criminal records participated.

Besides the fact that he was late at the protest, presidential candidate of the "Dignity and Truth" Party did not bother to stay too much there. Andrei Nastase went running shortly and left the protesters alone to demand the resignation of Nicolae Timofti.

Protesters brought a funeral wreath ant left it her at the door of the State residence.

The man who appears in the images is an active member and a close associate of the "Dignity and Truth" party leaders, Andrei and Vasile Nastase. Sergiu Suharenco, of 31-year-old, from Malcoci village, Ialoveni district, and was sentenced twice to prison twice.

In 2013, he was imprisoned for a term of three years for illegally crossing the border. A year later, his name figured in another criminal case.

This time, "Dignity and Truth" member was investigated for drug trafficking.

This time, the activists of "Dignity and Truth" party of Victor and Viorel Topa attacked the journalists.

The portal today.md did not escape injuries. Vadim Ungureanu was hitted by "Dignity and Truth" party activists, and he dropped his phone on the ground.

According to police, the protest was attended by several dozen people.