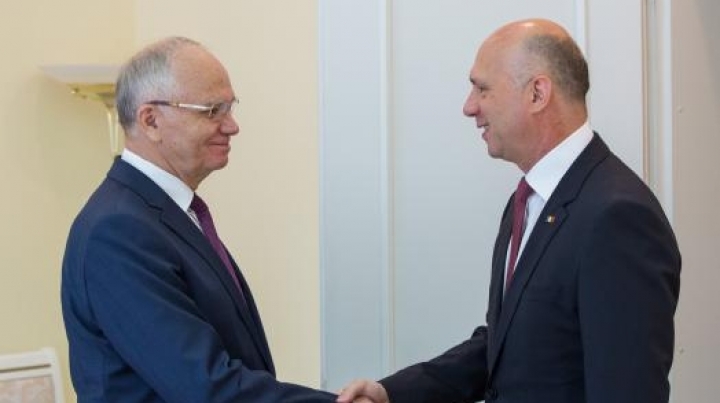 Russian Ambassador in Moldova Farit Muhametşin, sent congratulations today to Prime Minister Pavel Filip from the Prime Minister of the Russian Federation, Dmitry Medvedev, with the ocassion of 25 years of independence of Moldova. The message says that the deepening and expansion of Russian-Moldovan relations in the fields of trade-economic, investment and humanitarian is in the interest of citizens of both states.

During the meeting, the officials discussed the current level of bilateral relations and possibilities to boost economic cooperation between Moldova and the Russian Federation. Prime Minister Pavel Filip mentioned the interest of our country to strengthen pragmatic and constructive dialogue between the sides, based on mutual respect. In the context of economic cooperation, the two officials stressed the importance of organizing in November of this year's a meeting of Moldovan-Russian intergovernmental commission for economic cooperation. The prime minister was referring specifically to the opportunity to identify opportunities to increase the volume of Moldovan agricultural products exported to the Russian Federation and eliminate restrictions and barriers for some categories of goods.

In this context, the Russian diplomat said that currently, six Russian regions interested in collaborating with different regions of Moldova to extend trade. In turn, Prime Minister Pavel Filip emphasized the need for deepening economic relations between our countries at regional level across geographical areas, focusing on the welfare of citizens of the two countries. The prime minister also addressed the issue of ensuring the social protection of Moldovans working in the Russian Federation, informs gov.md.