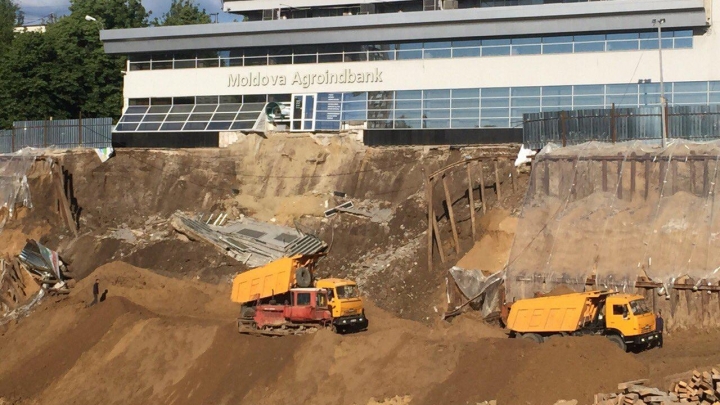 Many citizens living in Riscani district are living moments of fear. A building may collapse any moment because of a foundation pit dug for the construction of another building.

The stairs and the sidewalk already collapsed, and at the site the rescuers are working.

A commercial bank has its office in the building. In the incident were no victims.

The stairs of the building collapsed around 22:00. People living near the construction site are scared, especially when a 16 stories building is a few meters from the foundation pit.

Shortly after the incident, the mayor of Chisinau, Dorin Chirtoaca, came to the scene. According to the mayor, the company doing construction works has authorization, but is still needed to establish if the company has respected all the norms.

"One: the precipitation, two: projection error, and three: changing the concrete poles with metal ones, an inappropriate solution. An investigation will be opened in this case and will be penal and administrative verifications" said Dorin Chirtoaca.

The rescuers are taking all necessary measures to avoid the collapse of the building.

"The economic agent, responsible for construction, was informed to strengthen the foundation, in order to avoid ulterior landslides" has specified chief of Civil Protection and Emergency Situations Service, Mihail Harabagiu

The bank administration has yet to establish the damage value caused by the incident.

According to people living nearby, the construction of the building has started two months ago.