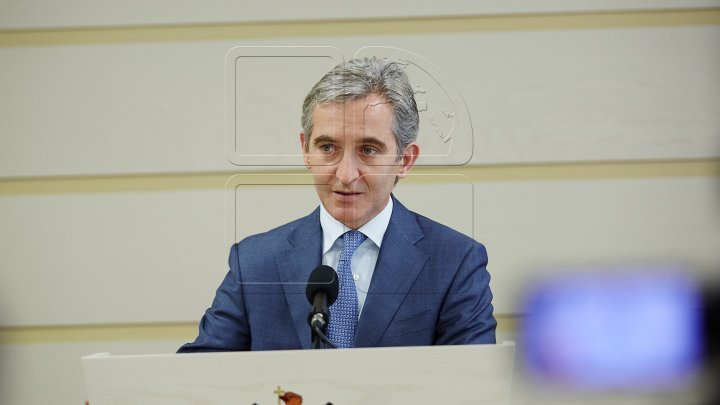 Deputy Prime Minister for European Integration, Iurie Leancă, together with Romania Ambassador E.S. Daniel Ioniţă, Head of the EU Delegation, E.S. Peter Michalko, and the interim Co-President of the Moldova-EU Civil Platform, Alexei Buzu, participated on Wednesday the official launch of the Romanian Presidency of the EU Council in Moldova.

The event was organized by the Embassy of Romania in Chisinau in cooperation with the Institute for European Policies and Reforms (IPRE).

The event was opened by the Ambassador of Romania, E.S. Daniel Ioniţă, who listed the priorities of the Romanian Presidency of EU Council which aims to promote political, social and economic cohesion between the Member States and all European citizens. The Ambassador also took action on the eastern dimension, including the organization a high-level meeting on the Eastern Partnership (PaE) in Brussels in May 2019 .

The Moldovan Deputy Prime Minister congratulated Romania on taking over the presidency of the European Union, emphasizing this is both challenge and opportunity.

It's challenging as it requires concentration of experience and expertise on the most complicated cases like Brexit, European Parliament elections, etc.

Moreover, the official stressed that the Republic of Moldova has great expectations from the Romanian Presidency of the EU Council on the dimension of the Eastern Partnership and the agenda of bilateral relations because Romania best understands the realities and socio-political challenges facing our country.

"In the context of the 10th anniversary of the launch of the Eastern Partnership, we hope to have serious debates about the future of this initiative, starting from the different aspirations of the PaE states. We look for greater attention from the European community on the security issues we face" , said Iurie Leancă.

The Deputy Prime Minister reiterated the axiom that European integration can only take place through Romania and together with Romania.

"I hope that we will succeed in finalizing the process of eliminating roaming services during the mandate of the Romanian Presidency - which shows an example for EU and EaP countries and brings benefits for citizens on both sides of the Prut, to advance substantially on energy interconnection and gas pipeline construction Iasi-Ungheni-Chisinau, to reconstruct the bridges. You have all support of Chisinau government as we're interested in joining our forces so that the Romanian Presidency will be a success and the success of Romania will be ours", said the deputy prime minister.

A congratulatory message came from the Head of the EU Delegation, E.S. Peter Michalko, who said that there will be several important events for Moldova during the Romanian presidency.

"Together, we will mark the 10th since the launch of the Eastern Partnership, 5 years since the signing of the Association Agreement and the Regime of Visas. Romania is the country from which you took the first European integration experience and that helps you enormously in the European path" , the ES said Peter Michalko.