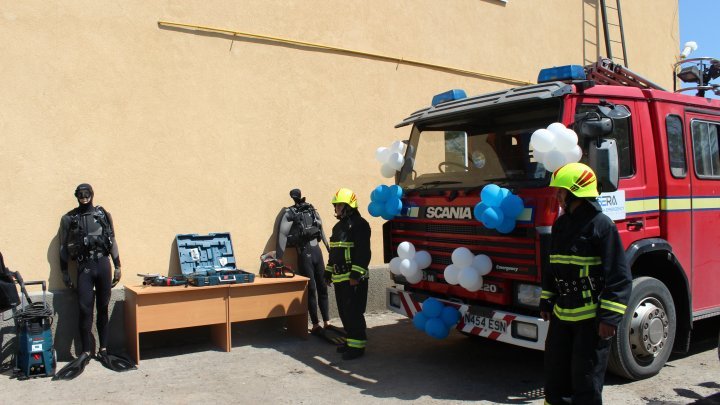 Deputy Prime Minister Cristina Lesnic participated in the inauguration of a new fire station and emergency service in the village of Copanca, Căușeni district. The event was attended by the Head of the EU Delegation in Chisinau, E.S. Peter Michalko and Dafina Gercheva, UN Resident Coordinator and UNDP Resident Representative in Moldova.

In her speech, the Deputy Prime Minister mentioned the importance of European investments for the economic and social development of the localities in the Security Zone and for the realization of the reunification goal of both banks of the Dniester.

"Today is a day to mark the development of a unitary set of tools to improve quality services, and the immediate intervention of emergency services, I refer to firefighters and rescuers.

Here, between the right bank and the left bank, the life is with more intensity. I think there are enough reasons to enjoy the project today, which is an absolute priority. The European route involves quality services, and today is a moment of the balance sheet.

I congratulate you on this beautiful initiative to bring firefighters and rescuers closer to the citizen's needs and closer to the solution of the proximity of the two banks of the Dniester, "concluded Deputy Prime Minister Cristina Lesnic.

In his turn, the Ambassador of the European Union in the Republic of Moldova pointed out that the improvement of living conditions on both banks of the Nistru river is an important imperative.

Especially, about 15,000 people will benefit from the renovation of these facilities, allowing the inhabitants of Copanca and the surrounding areas to use the most qualitative emergency services.

We recall that the rehabilitation of these social objects was accomplished through the Support to Confidence Building Measures Program.