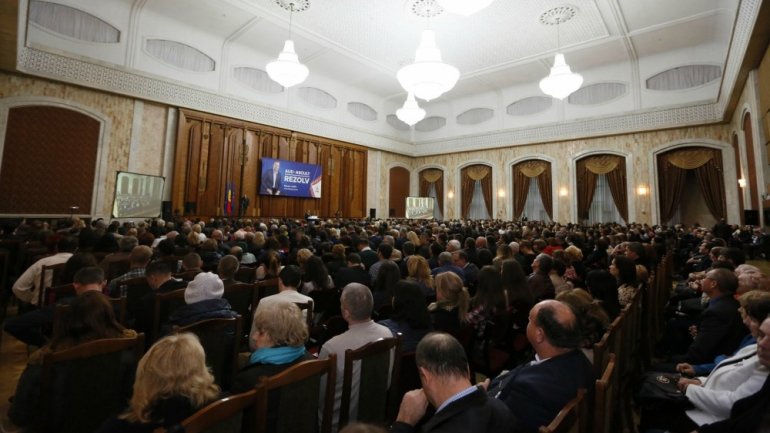 Chisinau Municipal Organization Forum. The event had as a goal the mobilization for the presidential election and showed team unity and quality of the Democratic Party.

President of the PDM Municipal Organization, prime minister Pavel Filip urged his colleagues to mobilize on the last hundred meters, until 30 October, and to improve the potential of PDM to provide support to the party candidate - Marian Lupu.

"The organization is mobilized to convince the residents of Chisinau that the best solution for Moldova is Marian Lupu as president. Moldova needs a responsible president who cares about his country and does not promote the interests of other states. At the same time, we have a candidate who was, throughout his career, a man of balance and progress" said Pavel Filip.

"The force of a team is checked in important moments. We are in the last week before the election, when the largest mobilization is needed. The stakes of this election is an important one, because on them largely depends the way Moldova will go on" said Parliament Speaker Andrian Candu, who urged all those who want a good future for country to support a president who promotes progress and the closeness to the EU.

"Being part of PDM delegation in Brussels, I attended multiple meetings of Marian Lupu with notorious European personalities. I saw the support and respect PDM leader received in Brussels. I entered this electoral campaign as a volunteer, so that Moldova will have a president like Marian Lupu" said the young democrat Victoria Rata.

PDM leader Marian Lupu thanked for the support and confidence of the Democratic team, stressing that the electoral platform he supports is the one for the development of Moldova.

"After 20 years, Moldovans received the right to elect their president directly, and this is important. But even more important now is who will be the choice. Stake of the elections from 30 October 2016 is whether Moldova can develop rapidly or stop its development. Breaking the Association Agreement with the EU would mean a big step back, a total deadlock for Moldova. Same is the case triggering early parliamentary elections ", said Marian Lupu who reiterated that he will fight for the future of Moldova in the EU, for a country with strong economy, for jobs in Moldova, for united families.

PDM candidate for the position of president, Marian Lupu, appears on the ballot paper under the number 1.