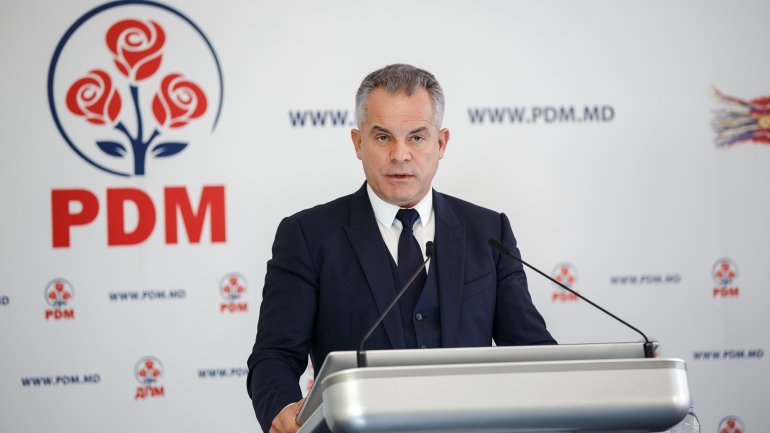 The Democratic Party of Moldova proposes the election of deputies in single-member constituencies. Moreover, Moldovan citizens will have the right to dismiss MPs. The statement was made by PDM leader, Vlad Plahotniuc during a press conference.

Moreover, the Democrats claim that, for the first time, Moldovans living abroad will be able to choose their lawmakers.

"Citizens overseas can't make their voices heard in the country. It's difficult to implement any project to bring home our people, since they are not represented in the Parliament. For the first time, the diaspora will be able to have their own MPs: people who come from the diaspora, that understand their problems, and will help them" ,  said Vlad Plahotniuc.

"In order to reform the political class with people's desire to be with their children and have a better life, I, together with colleagues from PDM, have decided to support the reform of election of Members of Parliament and to promote the idea of the uninominal vote. The uninominal vote solves some important things: it gives real possibility of citizens to decide whom they send to Parliament, not to vote for party lists behind which hide sometimes anonymous persons. The uninominal vote makes the MP to be representative of the community, and come from a specific district. The uninominal vote gives the possibility to districts to be represented in Parliament by local people, not deputies or party leaders or a group of politicians. But, the uninominal vote certainly does solve the problem in terms of citizen control over deputies. In business, if you hire a man and he does not do his job, you let him go. Imagine, if incompetent people will govern for four years, the company will go - bankrupt. In politics, in the current electoral system, citizens have to stand and witness how MPs are ignoring their vote. As a result, I will announce the solution I have proposed and was accepted: the iniciative on changing the electoral system, we will introduce for the first time in Moldova the possibility for citizens to withdraw the mandate of MPs" , said Democratic Party of Moldova leader, Vlad Plahotniuc.

Moreover, The PDM chairman has announced that a national campaign to inform the citizens will be launched in the coming days.

"A national information campaign will be launched through which we will present to people what the uninominal vote is, our initiative, what we propose. We believe that this dialogue with people is very important, because we talk about an initiative that directly concerns them" , said PDM president Vlad Plahotniuc.

Vlad Plahotniuc has sent a message to lawmakers who criticize the initiative as the one "proposed by Plahotniuc".

Earlier, Parliament Speaker Andrian Candu, has announced the creation of a working group to improve electoral legislation. And President of the Venice Commission, Gianni Buquicchio said that the institution is willing to cooperate with the authorities of our country to change the electoral system.

PUBLIKA.MD recalls that nearly 78-per-cent of persons asked are in favor for the single vote, according to the survey conducted by Intellect Group. 64-per-cent want a mixed system (Both parties and single votes). The survey was conducted on a sample of 1,300 people between February 10 to 20th. The margin of error is around 2.7 percent.

Please note that the uninominal voting system is a type of electoral system practiced in the US and UK. This type of ballot is the election of individual candidates directly, as opposed to the system of choice on lists drawn up by parties in the political life of a country.