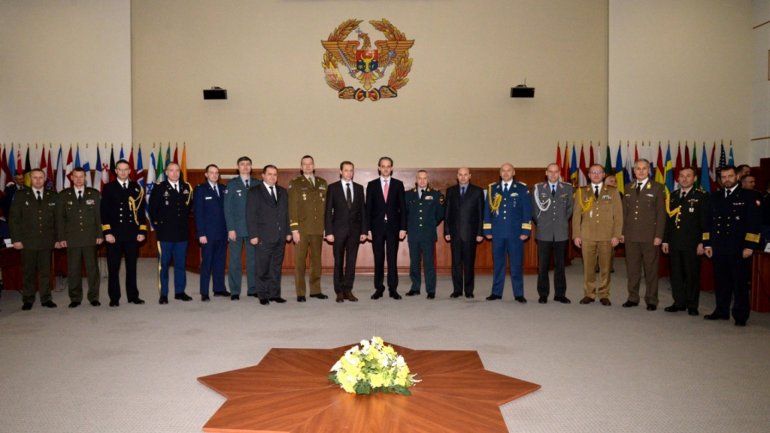 Annual Reunion of Accredited Military Attaché from Republic of Moldova have taken place today at Defense Ministry. During the event, the topic foreign cooperation in terms of defense from last year was approached.

Present at the event, Defense Minister Eugen Sturza expressed his gratitude toward the Military Attaché and OSCE representatives for supporting and assisting the reformation of the national defense system, mentioning that through those projects and common initiatives, were consolidated the military capabilities of the National Army in key areas, such as the system for military education and training, staff, technical-material resources and infrastructure.

"Thanks to you, who are the messengers of the army you represents, we managed to maintain good collaboration relations with our partners in this area" Eugen Sturza said.

Lieutenant Colonel Tatiana Ionel, chief of the International Cooperation Department, has spoken of the main actions take on the international field, aiming to realize and promote reforms in the defense sector and enhance the image of the military institution abroad.

Therefore, Tatiana Ionel spoke of the collaboration with European Union, NATO and OSCE, within projects, such as: Defense Capacity Building Initiative (DCBI), the participation of the National Army in international peacekeeping mission (KFOR and of United Nations), as well as the activity within the project "Arms and ammunition stocks management", implemented with the support of OSCE mission to Republic of Moldova.

Lieutenant Colonel Ionel also mentioned the contribution of partner armies, through joint projects, to strengthen the defense system. These are training, logistical assistance and participation in multinational exercises.

According to Tatiana Ionel, for the year 2018, the main actions of the Defense Ministry will be directed towards improving the political and strategic framework in the field of national defense and strengthening the legal and institutional framework, the bilateral and multinational relations development of international defense cooperation, as well as increasing the National Army's contribution to regional and international stability.

President of the Association of Military Attachés accredited in Moldova, Lieutenant Colonel Jeffrey Alan Muir, appreciated the Defense Ministry's willingness to inform the military diplomats about the institution's priorities for 2018 on the accountability segment, which will help identify opportunities to strengthen cooperation in field.

At present, 29 military attachés are accredited in the Republic of Moldova. Five states - Romania, the USA, the Russian Federation, Poland and Ukraine - have military diplomats based in Chisinau and the rest - based in Bucharest, Kiev, Belgium and the Kingdom of the Netherlands.