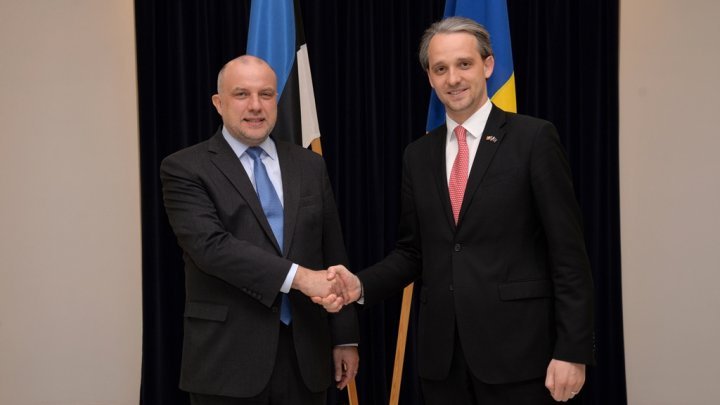 Defense Minister Eugen Sturza, on an official visit to the Baltic Countries, had a series of meetings with Estonian officials in Tallinn on Tuesday.

Thus, during the talks with his Estonian counterpart, Jüri Luik, the Minister of Defense addressed issues related to the reform of the defense sector in our country, the bilateral cooperation on the military dimension and the prospects for strengthening the Moldovan-Estonian partnership.

Eugen Sturza informed Jüri Luik about the priorities of the medium and long-term defense institution, focusing on the reform of the National Army. In this respect, Minister Sturza mentioned that professionalization process of the institution will begin this year, by hiring professional militants, training and preparing troops according to modern concepts and endowment with new weapons.

The Minister of Defense also said that the Republic of Moldova wants to make a greater contribution to the efforts to stabilize and maintain the peace at international level, and for this purpose the institution prepares with the help of the international experts, the military to be deployed in external missions.

In turn, Jüri Luik described the ongoing process of reforms in the Estonian army, the role of NATO cooperation for their success, and the need for joint efforts to tackle the threats of a hybrid type.

In Tallinn, Eugen Sturza met with the Chairman of the Defense Committee of the Estonian Parliament, Hannes Hanso, and visited NATO's Center for Excellence for Cyber Defense.