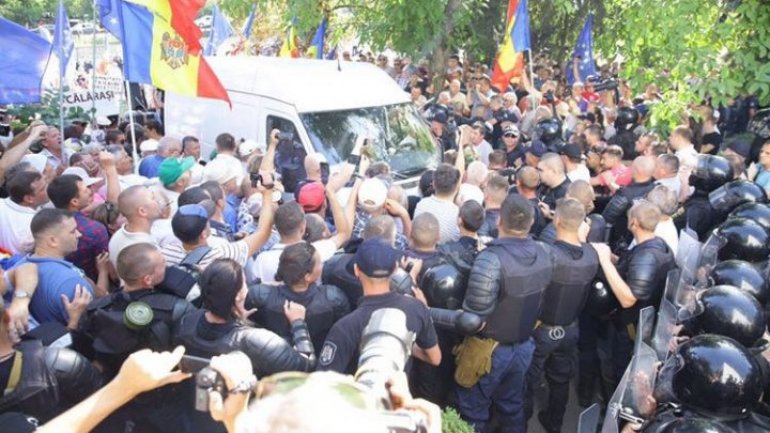 Four policemen were injured during the violence committed by the opposition at the protest surrounding National Television. One of the victims was hit in the head by the aggressive protesters, the other three - by the minibus used to enter the yard of the television.

"My leg was hit by the minibus. There were lots of citizens involved in the protest. Not only the lives of policemen but also the citizens were riskily harmed", said policeman Vasile Golopcu.

"We were almost hit by the minibus. If we had not stepped back and avoided the bus, we would have been crashed by the bus", said Nicolae Rusu, a police officer.

The driver who entered the crowd with the minibus was detained for 72 hours. Previously, he was issued a search warrant because he ran off the scene.

The offender was detected as Ion Matasevici, 50-year-old citizen of Hâncești. He acknowledged his guilt and risked up to 8 years of imprisonment.

A criminal case has been opened regarding the incident.

The transport (minibus) was collected by the police as well.

"The employees of the General Directorate for Criminal Investigation will initiate the procedure on this mean of transport. The goods that have been used to commit crimes can be confiscated specially and forced into state property," said Grigore Moga, deputy head of the Directorate general prosecution.

The suspect was also arrested last year after the violent protest on the Bulgarian Street, when several supporters of Andrei Năstase snatched pieces of stone from the cobblestone and threw them into the cops.

At present, Matasevici appears to be the defendant in the violence file of April 24 last year. Following the violence with Năstase's supporters, 17 police officers suffered, most of them being stoned.

"That minibus was installed in that place to make room for the protesters who came late, not to block the crossing of the protesters from Drumul Schinoasei street and to place those boxes," stressed Andrei Năstase, president of the Party "Dignity and Truth" .

According to the police, the organizers of the demonstrations could be held accountable for yesterday's violence.

Yesterday, the DA and PAS Platform supporters organized a protest in front of Parliament. Subsequently, the demonstrators tried to force the entrance to the headquarters of Moldova 1. The aggressive politicians asked the leaders of the post to call them more often on the TV programs and to live broadcast the rally.