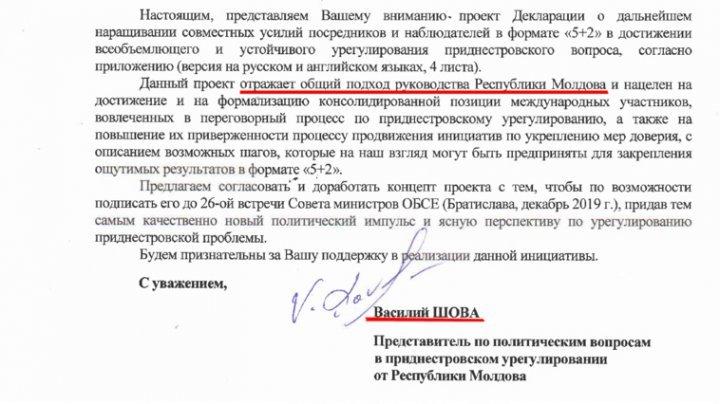 Deschide.md has obtained a new document which confirms that the Moldovan authorities (government, parliament, presidency) were the last ones who knew the draft declaration on further enhancing the joint efforts of mediators and observers in the 5+2 negotiation format, in achieving an comprehensive and sustainable settlement of the Transnistrian issue.

Last week Deschide.md exclusively published the respective draft declaration which was discussed in Chisinau last Thursday at the meeting of the Members of the coordination mechanism on the Transnistrian issue, convened by Vasile Șova.

Deschide.md then obtained a copy of the document which Vasile Șova on 5-8-2019 sent to the OSCE representative for Transnistrian settlement, Franco Frattini; the Head of the OSCE Mission to Moldova, Claus Neukirch; the representative of the Russian Foreign Ministry for Transnistrian settlement, Sergei Gubarev; and several Ambassadors accredited to Moldova.

Here is what Șova wrote to these foreign partners.

"We hereby call your attention to the draft declaration on further enhancing the joint efforts of mediators and observers in the 5+2 negotiation format, in achieving an comprehensive and sustainable settlement of the Transnistrian issue.

This project reflects the common position of the leadership of the Republic of Moldova and is aimed at achieving and forming a consolidated position of the international participants in the negotiation process regarding the Transnistrian settlement, as well as increasing their interest in proposing confidence-building initiatives, describing the possible steps, which in your opinion can be taken to record tangible results in 5 + 2 format.

I propose to approve and refine the concept of the project, so that it can be signed until the 26th meeting of the OSCE Council of Ministers (Bratislava, December 2019), thus giving a new political impetus and a clear perspective for the settlement of the Transnistrian problem.

We will be grateful for your support in carrying out this initiative. ”

For Șova wrote that this initiative reflects the common position of the leadership of the Republic of Moldova, Deschide.md talked with many participants in the meeting convened by Vasile Șova to know the details.

Monica Babuc from the part of Parliament attended this meeting. She talked to Deschide.md that the document presented Șova is nebulous because it contains many elements which are contrary to the interest of Republic of Moldova.

"My question was: who is the author of this document which contains many surprising and questionable things. Mr Șova said that: you can consider I'm the author and don't need to worry, because we will continue improving it and take into account the opinions of each of you", said Monica Babuc.

She also noted this document could be devised by someone away from Chisinau.

"It points us to think this document was invented by someone far from Moldova, further east. Moreover, it was worded in Russian", Monica Babuc added.

According to the Vice-president of Parliament, Șova didn't inform the people attending the meeting that he sent this document to members of negotiation process and ambassadors.

Babuc said this document would be signed at the 5+2 meeting in Bratislava and doesn't know when this is to be perfected, given the meeting is scheduled during October 8-10.

Kalman Mizsei was also present at the working meeting. He has joined the European Union High Level Advisers' Mission in August 2019 to help the Moldovan government to strengthen its reintegration policy with a particular emphasis on confidence building measures.

Each institution will express its position in written form, says Șova.

When asked by Deschide.md who was the document's author, Șova answered laconically and felt obviously annoyed.

"I and the Bureau of Reintegration".

"The document was sent to partners in the format 5+2, but not all of them. Only to those who are interested. I sent it half a month or a month a go. It doesn't matter", Deputy PM Șova replied.

Șova reiterated that "this draft declaration will not be discussed in Bratislava".

"It was not a public format. There is no draft. The drafts are dead already. Peacefully and quietly", said Nantoi.

The draft Declaration kept away from the public eye was sent to:

- The Head of the OSCE Mission to Moldova, Claus Neukirch;

- The representative of the Russian Foreign Ministry for Transnistrian settlement, Sergei Gubarev;

- The representative of Ukraine for Transnistrian settlement, V. Krîjanovski.

- The Ukrainian Ambassador to Chisinau.

- The Managing Director for Europe and Central Asia in the European External Action Service, Thomas Mayr-Harting.

- The US Ambassador to Moldova, Derek Hogan.

- The Head of EU Delegation to Moldova, Peter Michalko.