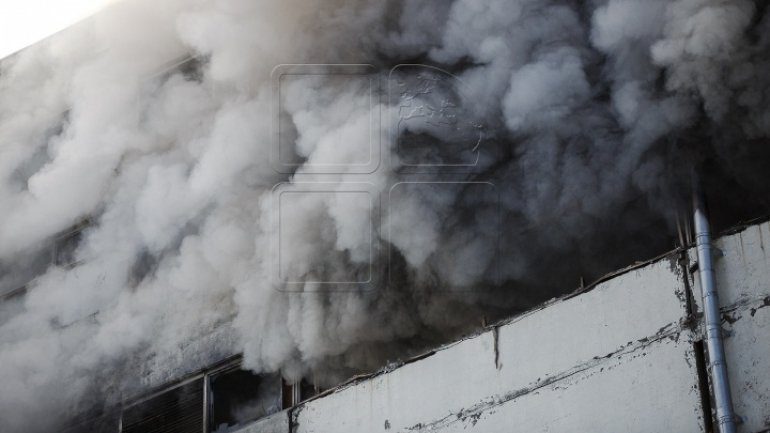 (19:10) The 2 fire trucks will remain on the spot for the whole night. Firefighters still did not found the missing woman.

Family of Moldovan fireman dead in performance of duty receives over 17,000 euros

(19:05)  2 fire truck will remain on the spot, in case of any emergency. Further, the Experimental laboratory will the fire place to establish the circumstances of the ignition.

(18:40) The fire has been extinguished, but firefighters are still looking for the missing woman.

(17:40) The fire was liquidated. The information was confirmed by employees of Emergency Service.

(17:02) According to the SPCSE press officer, Diana Turcanu: “The rescuers undertake, at the same time, measures to find a woman who was reported missed today, after her relatives informed fire fighters that she had not been found since the outbreak of the fire on 11 November” ,  Turcanu said.

(16:45)The flames catches an area of more than 1,000 square metres. Firefighters are still looking for the missing woman. A team from the SPC is involved in the search work. In addition, 16 trucks are working on the liquidation of the fire.

Security forces have opened yesterday an investigation and continue to establish all the circumstances of the fire. If it will be proven that the fire occurred due to non-compliance of fire safety, the person will be guilty risks up to six years in prison. Investigators will discuss with witnesses and with several employees of the deposit.

However until then, experts will be able to access the building only after 72 hours of complete extinction of the flames.

At the moment they are analyzing various versions that would have led to this fire. Rescuers do not exclude that the fire would be produced following a short circuit of electricity.

(15:33) Firefighters are still looking for the missing woman, with the help of trained dogs. According to latest information, it has been confirmed that the fourth floor has cracks. Police is investigating all possible versions of the fire outbreak.

(15:07) According to latest information, 10 people were working in the warehouse. After 72 hours, the experts will be able to investigate the cause of the fire. The police will proceed investigating and asking witnesses. The building had issues, according to the construction documents in 2013. People guilty risk imprisonment up to 6 years. The firefighters are still inside the building.

(14:12) The building will be analyzed. Police will investigate the cause of the fire. 4 firefighter groups are in the building.

(14:03) According to latest information, firefighters managed to localize the fire after 28 hours. 17 fire trucks are on the spot and over 70 firefighters.

(12:25) For more than 26 hours, firefighters are fighting the flames on the Uzinelor street in Ciocana sector. By this time, the fire has been localized and there is no risk of collapse of the building. The relatives of the woman who has remained locked in the building are on the spot.

The identity of the woman who was once previously missing has been determined. Angela Ursu is a resident of Sangera town. The 44-year-old woman is the mother of two children and worked at the depositary. Her husband and the victim's sister came to the spot.

"Her birthday is on November 28th. She would have been 45 year-old. I've never been here, but it's dangerous. We are trying to locate her since yesterday" , said the victim's husband, Victor Ursu.

The victim's sister says that the last person who had seen Angela Ursu is in the Hospital. She miraculously escaped:

"We are still working to locate the fire, for it to not spread and collapse the building.We are waiting to get the information on the risk of the building collapsing." , said Liliana Puscasu, CPESS press officer.

(12:15) Six firefighters have been hospitalized.

According to doctors, their health situation is stable. The firefighters will be most probably discharged on Monday-Tuesday. Later rescuers will be admitted to the Military Hospital in the capital, where they will be subjected to a more elaborate treatment. The authorities of Emergency Services said that they will have the opportunity to go to a nursing home.

A warehouse employee was among the hospitalized, who previously was in a coma, but recovered this morning. It is possible that the woman will remain hospitalized until Wednesday.

(11:30) A 44-year-old woman is still missing in the devastating fire in Ciocana sector of the capital. Her relatives came to the fire scene in an attempt to trace the woman. According to rescuers, she attempted to leave the warehouse with colleagues but disappeared among the clouds of smoke. She has two children.

(11:20) Firefighters worked all night to extinguish the fire, a mobile kitchen has been installed. All night firefighters battled flames that engulfed the four and the fifth floor of the building. Next, firefighters are trying to hold off the disaster for 24 hours already.

Fire is fueled by flammable materials inside the building. According to the press officer of the Service Emergencies, Liliana Puscasu new teams were mobilized for rescue and fire forces exchanged. Because it was cold, the exhausted firefighter of Emergency Situations provided them with a hot meal.

''We warm up with tea. Thank you to the head of service for something warm. We will keep the fire in order for it to not expand further. The fire is very difficult to extinguish. ''

Nobody remained indifferent. Many came to visit last night the fire crews and brought them water bottles.

''I just brought some water for firefighters. I realized the boys will need water bottles if they have respiratory problems. ''

Throughout the entire night, 18 intervention vehicles were on the spot in fighting the flames which involved nearly 100 firefighters and rescuers.