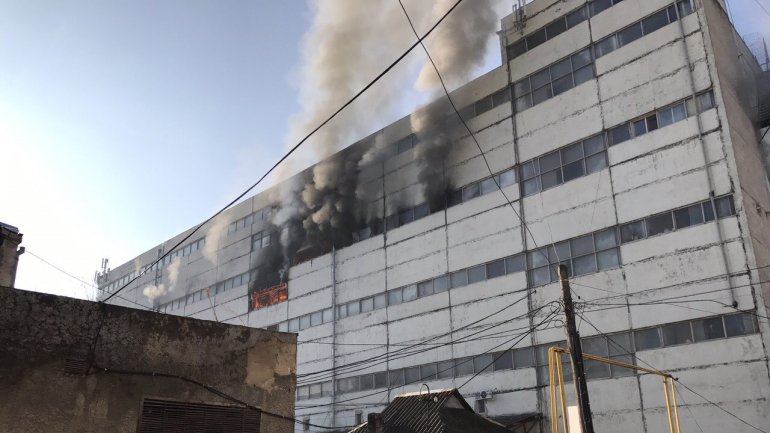 (UPDATE 19:05) According to latest information, the fire outbreak has not been established, even after 9 hours of fire. Eight firefighters and an employee of the store needed doctors' help during today's fire in the capital. Seven injured have been taken to hospital, while two of the rescuers decided to return to the calamity and help their colleagues.

(UPDATE 18:20) According to latest information, there are 25 fire truck on the spot, a staff of over 100 firemen and rescuers. Moreover, six firefighters remain hospitalized for medical treatment. Their condition is stable.

(UPDATE 18:17) Moldovan authorities opened two criminal cases on deadly warehouse fire. The first one was for unintentional death and second one for negligence.

(Update 17:57) According to latest information, there are 25 fire truck on the spot.

(Update 17:43) According to latest information, the car has passed on the red light, while the fire truck had the lights and the acoustics on and passed on the green light.

(Update 17: 33)  At the moment there are 20 fire truck on the spot. Firefighters are still struggling to locate the devastating outbreak of the fire.

(UPDATE 17:30) A fire truck was involved in a car accident while speeding to the incident on Uzinelor street. Police is on the spot. (UPDATE 16:55) Geoteisists are on the spot. They have done their measurements and did not show any large deviations in the external construction of the building, which means that the risk of external walls to collapse is small.

At the same time, it has been found that toys, furniture and other combustible materials were in the interior of the building.

(UPDATE 16:20) The young fireman who lost his life was the first to enter the building to rescue all trapped persons. Due to low visibility, he fell from a height of three meters and a half. His colleagues found him after nearly an hour of searching, but it was too late.

(UPDATE 16:15) Victoria Kriukova Publika TV correspondent: "The firefighters have not managed to find the center of the fire, even after 6 hours. 16 trucks and 110 firefighters are on the spot. Cracks are starting to show on the walls of the building, which highlights the danger of falling. It is very dangerous for firefighters to work inside. All efforts are focused on cooling the building."

(UPDATE 16:00) According to latest information, the pillars inside the 4th floor collapse therefore the risk that the entire building will collapse increases also. Firefighters say the interior temperature is over 1,000 degrees.

(UPDATE 15:19) Oxana Bodnar, PUBLIKA TV correspondent from the Hospital: Seven people were hospitalized after the fire: six firefighters and a woman. All have been hospitalized in Toxicology. Itis not known when the firefighters will be discharged, because they need treatment to recover from carbon monoxide poisoning.

(UPDATE 15:02) Viktoria Kriukova Publika TV correspondent: There is risk of collapse of the building. Firefighters are cooling down a part of the building.  A thousand meters area has been affected. Access to the area was restricted. There is more smoke than fire.

According to information, the building belongs to the Moldcoop company.

Several officials including the deputy mayor of the capital, Nistor Grozavu are on the spot.

(UPDATE 15:15) Viktoria Kriukova, correspondent PUBLIKA TV: There is a risk of building collapse. A part of firefighters are trying to cool down the building, in order to prevent the flames to extend. A surface of thousands of meters has been affected. The access in the area has been limited. There is more smoke than fire, which is hindering the firefighters' work.

According to information, the building is owned by Moldcoop company.

At the scene went many officials, one of them being the deputy mayor of Chisinau, Nistor Grozavu.

(UPDATE 14:45) Oxana Bodnar, Publika TV correspondent from the Hospital: The patients' state is stable. There are four firefighters and a woman employee of the deposit still in the hospital. Two other firefighters have refused hospitalization. None of the patients have suffered serious injuries or burns.

(UPDATE 14:43) Victoria Kriukova Publika TV correspondent: Fire Fighting lasts more than four hours. Firefighters are still trying to locate the fire, which means that the flames could spread to other floors of the building. No firefighter is inside the building because it is extremely dangerous for their lives. The information about any employee being still in the building can not be denied nor confirmed yet.

(UPDATE 14:24) According to the latest information, six firefighters and an employee of the factory have been hospitalized.

(UPDATE 14:15) Liliana Puscasu, DSE press officer: Firefighters are still struggling to locate the fire outbreak. Part of the building has been hugely deteriorated. There is a collapse potential. Those 14 trucks are on site.

(UPDATE 14:08) Firefighters are evacuating people from nearby because of danger of collapse of the building.

(UPDATE 13:54) The fallen firefighter is Ivan Nogailac, aged 28. He was working in the Civil Protection and Emergency Situations Service since 2009, the last position being chief of Rescuers and Firefighters Post of the Operational Intervention Republican Center of Civil Protection and Emergency Situations Service, having a rank of major sergeant of Rescue Service. He was married, having two underage children.

The entire staff of Civil Protection and Emergency Situations Service express their condolences to his family and relatives, his death being an irreplaceable loss. For the life of the firefighter, his colleagues fought for more than an hour, but without result.

(UPDATE 13:47) As a result of fire, five persons were hospitalized in Trinity Hospital: four firemen and a warehouse employee.

(UPDATE 13:23) Oxana Bodnar, PUBLIKA TV correspondent from Trinity Hospital: Three firefighters are still at the hospital. They were poisoned by the carbon monoxide, but did not suffer burns.

(UPDATE 13:19) The flames spread to the upper floor of the building.

(UPDATE 12:51) Victoria Kriukova, PUBLIKA TV correspondent on the fire scene: "Firefighters continue to battle the flames. There is a possibility for another woman to be still blocked on the inside. For now the information can not be officially confirmed. Flames broke out also on the other side of the building.

(UPDATE 12:45) Oxana Bodnar, PUBLIKA TV correspondent from the Hospital: "Another firefighter was brought in serious condition. Earlier a woman was hospitalized in serious, but stable condition."

(UPDATE 12:40) Liliana Puscas, DSE press officer: "The fireman unfortunately died. He was an 28-year-old employee of the Republican Center of Operational Services who died on duty. He was the one who identified the employees locked inside. He fought with his life to save the life of other people. He was stuck inside for almost 40 minutes. Everything possible was done to save him, but unfortunately with no success."

Images from the moment when the dead firefighter was removed from the fire scene.

(UPDATE 24:28) A firefighter was taken out of the building in an unconscious state. He received first aid and has been transported to hospital.

(UPDATE 12:16) Oxana Bodnar, PUBLIKA TV correspondent from the Hospital: "Here a woman was hospitalized because she suffered in the fire. Her condition is serious, but stable. Also, two firefighters have received medical care but refused hospitalization. One said he refused the hospitalization to return to the fire scene to participate in its liquidation"

(UPDATE 12:12) Ion Tulgara specialist at Municipal Public Health Center: "The deposit is of industrial goods. We'll find out later the exact cause of the fire. A further examination of air quality in the area is necessary."

(UPDATE 12:06) Vladimir Garaba, president of Ecological Movement in Chisinau: " It's a real threat to those nearby. Those participating in the liquidation of the fire can also be affected, even if they're not wearing a mask. The plastic is recognized as a highly toxic material. It is recommended for everybody nearby to be evacuated and nearby houses to be closed for the smell to not come inside.

(UPDATE 12:00) Victoria Kriukova Publika TV correspondent: Firefighters continue to battle the flames, but also to save the live of their colleague stuck on the inside. According to reports, the young firefighter is stuck for more than half an hour on the inside. Initially flames broke out on the fourth floor of the building, but later spread to the floors above and below. So far it is unclear what kind of deposit is and what has been stored on the inside.

(UPDATE 11:45) Victoria Kriukova Publika TV correspondent: "There is no new information about the firefighter locked inside. The fact is that he is alive. Several teams of firefighters entered the building. The remaining people in the building were evacuated. The flames are equally strong, and firefighters still struggling with liquidation of the fire."

(UPDATE 11:42) Galina Bostan, Ciocana sector mayor: " The situation is calm in the region. We expect, for the firefighter who suffered to get out of the building. The buildings in the area were evacuated."

(UPDATE 11:36) According to representatives from Union Fenosa, the electricity has been disconnected in the area.

(UPDATE 11:31) Police surrounded the area, and access is denied to prevent other victims.

(UPDATE 11:26) Victoria Kriukova, Publika TV correspondent: "Four people needed medical help. Allof them were transported to the Hospital. A firefighter also suffered in the fire. He was stuck inside, and his colleagues are doing everything possible to get him out from the building."

(UPDATE 11:24) A fireman who was poisoned with carbon monoxide: "Plastic toys burn inside burn. I feel better now."

(UPDATE 11:20) Diana Blanaru, press officer of the Medical Center: "A victim was evacuated from the fire. He was transported to the hospital in the Department of Toxicology. Three other people have been poisoned by smoke and transported to the Hospital. Two ambulances are on the spot."

(UPDATE 11:16) Liliana Puscasu, DSE press officer: "10 rescuers are working to find out if there areother trapped inside. Other intervention teams have come from Durlesti town. In total there are 18 fire trucks on spot."

(UPDATE 11:12) A few firefighters needed medical help after they have been poisoned by smoke.

(UPDATE 11:08) Witness: "Somebody told us to get out of the building. Plastics, furniture and materials have been kept in the building."

(UPDATE 11:00) Liliana Puscasu, DSE press officer: "Firefighters managed to get one person out of the building. Firefighters are still working to identify others who might be inside. The man was taken by the ambulance. He, most likely, got intoxicated with carbon monoxide."

(UPDATE 10:54) Diana Blanaru, press officer of the Medical Center: "So far the medical help was not needed. According to the information, we know that two people were locked inside. A major risk for those on the spot is poisoning with carbon monoxide"

Witness: "I heard a loud explosion when the windows broke. I do not know what happened. People got out when they saw the fire."

(UPDATE 10:38) Witnesses say  four people are blocked in the building. For now the information can not be confirmed.

(UPDATE 10:31) Liliana Puscasu, DSE press officer: "We are talking about a third degree fire. There are 14 intervention trucks on the spot, including two ambulances. The flames has been detected on the 4th floor of the building. So far no injured have been recorded. Later we will have more information. It is still too early to talk about the cause of the fire. The 901 service have received the call around 9:50 a.m. An investigation will be started to establish the circumstances of the fire. All fire detachments in Chisinau are on the spot. "

According to information, inspector patrols are inspecting the movement of the area.

(10:18) Strong fire started at the factory of cereal products in Chisinau, located on Uzinelor 9 street.

14 intervention vehicles are on the spot.

According to the information, people are also trapped in the elevator of the buiding. Authorities have declared third degree fire.

All people in the building were evacuated.