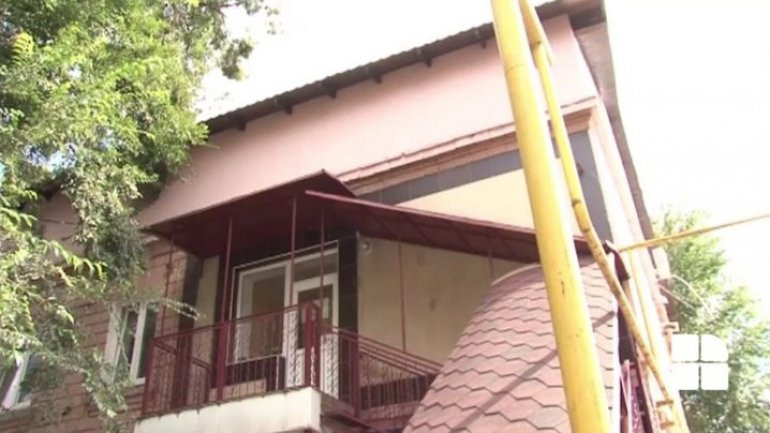 The residents of a block in Bălți complain that the local leader of the Dignity and Truth Platform, Arina Spataru, illegally built an attic, where she arranged a tailoring workshop. The pretext was roof repair.

Neighbors are disturbed by the noise produced by sewing machines and the fact that they have to pay for the heating of the attic. Moreover, they say construction works have been done with violations and after every rain the water floods their homes. The owner denies the allegations.

According to the tenants, the house on St. Nicholas Street 61 was very old and damaged. People were glad when it was proposed to repair the roof, but they did not even expect a loft would be built.

"After they built the attic the water started flowing into our apartments. We can not keep our clothes here, it's raining all the time. We have no electricity because it was a short power cut resulting from water runing through the walls."

"We would not have signed, we do not need the attic. They told us they would repair the roof and the staircase of the block and did nothing."

Another discontent to the tenants is that they have to pay huge amounts of money for heating. They say this is because I pay for the heating of the attic.

"We ask them to be disconnected from the heating. They only pay for a pipe, but de facto have installed the heating throughout the perimeter of this attic. The winter is 22 degrees Celsius."

People filed a complaint with the police. Law people claim they will perform a check over the situation. The attic owner says he has all the papers in order but refused to present them.

"I want to see the complaint first, I want to clarify what I'm talking about and then I'll come up with a reaction, and now I'm working and I can not pay attention."

According to the police, a check will be carried out shortly.

"The employees of the Police Inspectorate will check the facts invoked by the people domiciled in the given apartments. Depending on the detected violations, we will expose the punishment that will be imposed on the owner of the workshop," said Eugenia Molceanov, press of IP Bălţi.

The officials from Balti City Hall, who issued the permits for building the attic and running the workshop, refused to give details on this case.

The attic was built in 2013. A year later, the lodgers lodged a complaint with the State Inspection of Construction.

The institution's officials said that, after the checks, no violations were detected, and all the acts were fine. At the same time, they claim that the situation could have changed, and in order to expose it, it should carry out additional control.

People say they will go to the Public Health Center, but also to the Emergency Situations Service to dispose of controls in the workshop.