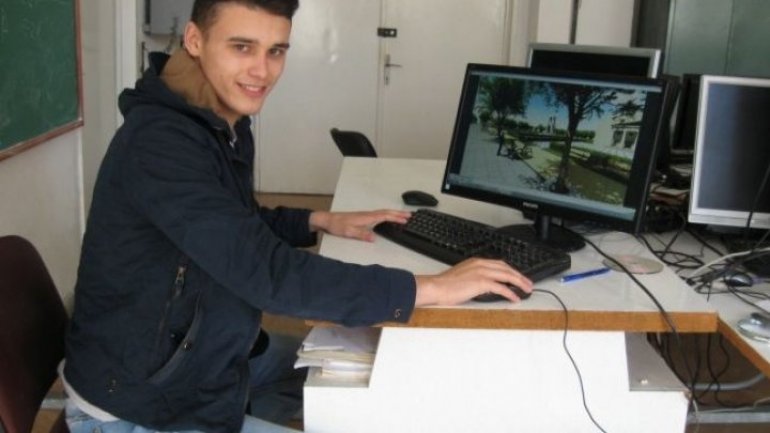 Daniel Plânguu, a Moldovan student in the second year at the Galati Engineering Faculty (Romania), has already put his mark on two major research projects. He participated in the virtual recreation of the historical center of Galati and invented a device that designs a hologram to prevent road accidents.

Basarab Daniel Planuu (20 years old), a second year student at the Galati Engineering Faculty, is passionate about computer programming and simulation, and he will choose the computer science applied as a specialization next academic year.

The young man is Moldovan national, but has filed his case for Romanian citizenship.

"I chose to study in Romania as this diploma is recognized at European level and you can work wherever you want in Europe. It is possible, however, to remain in Romania. We'll see how things evolve, "Daniel told adevarul journalist.

His chance was the scientific circle of Applied Informatics in Materials Engineering, which works at the Faculty of Engineering in Galati and is coordinated by Professor Florin Marin Bogdan, where he developed his computer design skills.

It was not easy for the young man to pass several programming and even psychological tests to be admitted to a small group of students who have made an innovation goal.

The results came immediately, Daniel was offered a three-month internship at a strong firm in Galati in the very first year of his studies.

The young man impressed with an automation project for an organic painting line of the board. Practically, he conducted a series of tests, identifying the problems faced by the painting line mentioned.

"Fans from the filters used in painting did not work, which could bring dust particles into the plant, thus affecting the painting process. I came up with the idea that these filters should be changed at different time intervals, so that they will not be able to stop working, "explained the student.

Its biggest achievement so far is a holographic system that can be mounted on cars, alerting the drivers there is car in front of them.

"The device is mounted on the cars, and when it's foggy, the device can warn the drivers to slow down," Daniel added.

He made dozens of computer simulations of the holographic system to analyze what can be improved, and then test it in the near future under real traffic conditions.

The idea came up after his observation that there are many road accidents under foggy weather.

"I want this device to be mounted on Police cars and ambulances as well, because they are moving in the area of accidents to drive traffic and save lives, but often they are also victims of other accidents because they are not seen in time by other drivers. The system will emit some bright spots that create a 3D element on the fog, "the student pointed out.

Several scientific studies have shown that the fog is denser near the earth. Going forward with this idea, Daniel set the bright rays of his holographic system to be projected at a height of about 20 or 30 meters so that they can be seen by any car approaching the vehicle where it will be mounted.

The device cost has not been estimated, but it may be available in two variants. The first, more expensive, would require the holographic system to be able to design short messages to alert the approaching drivers, and the latter would only go on the bright spots.

Daniel's holographic system has already been awarded by Apan at the UGAL Invent Research and Innovation Salon, organized by the Danube Delta University, with "the prize for increasing the safety of pedestrians and drivers".