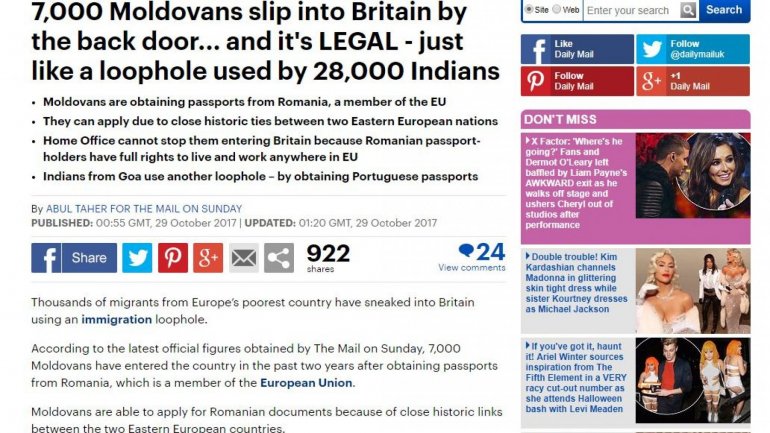 Thousands of migrants from Europe’s poorest country have sneaked into Britain using an immigration loophole.

According to the latest official figures obtained by The Mail on Sunday, 7,000 Moldovans have entered the country in the past two years after obtaining passports from Romania, which is a member of the European Union.

Moldovans are able to apply for Romanian documents because of close historic links between the two Eastern European countries.

The Home Office has been powerless to stop them entering Britain because Romanian passport- holders have full rights to live and work anywhere in the EU.

Moldova is not an EU member and the former Soviet state is regarded as Europe’s most impoverished country. The average monthly salary is just £197.

Figures from the Office for National Statistics also show 28,000 Indians from Goa have entered Britain over the past six years using another astonishing loophole – this time by obtaining Portuguese passports.

Goa was a colony of Portugal until 1962, and under Portuguese law, anyone can obtain a passport if they can prove that they, their parents or grandparents were born in Goa before 1962.

Last year The Mail on Sunday revealed how 20,000 Indians had entered Britain – 3,000 of whom had obtained Portuguese passports by using false documents.

The number of Moldovans and Indians coming to Britain using the two loopholes is likely to surge in the run-up to Brexit.

The ONS figures show that 4,000 Moldovans entered Britain in 2015 – just over a year after all immigration restrictions on Romanians were lifted by the Home Office.

By last year, there were 6,000 Moldovans living in Britain as Romanian nationals. By June this year a further 1,000 had entered the UK, the data shows. There are also 256,800 Romanians in Britain, most of whom entered after 2014.

Under Romanian law, a Moldovan has to prove that one of their grandparents was born in Romania, which is easy due to close ties between the countries.

Andrew Green, chairman of the think-tank MigrationWatch, said: ‘This is, of course, a loophole in the immigration system of the European Union, which, for the time being, affects the UK. We are looking at millions of people who, in principle, can take advantage of this route until we can bring free movement in the EU to an end.’

Last night, the Home Office said: ‘After we leave the EU, we will put in place an immigration system which works in the best interests of the whole of the UK.

‘We are considering the options and will set out our plans later this year.’