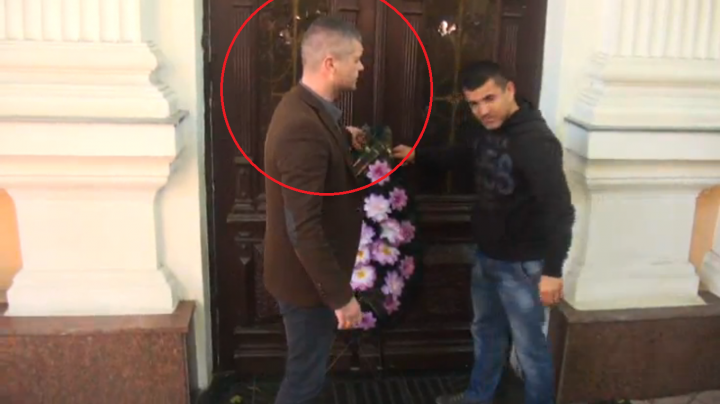 DA Party is using recidivists as lance during protests. They brought a funeral wreath to the president Timofti, which they put at the door of the State Residence. One of the men who brought the wreath in front of the State Residence is Sergiu Suharenco. The DA activist was investigated in 2013 for illegal crossing of the state border.

The name of Suharenco appears in a new penal case, opened in 2014. At that time, the DA member got into the attention of police for being involved in traffic of narcotic and psychotropic substances.

Suharenco is present at the majority of the manifestations organized by DA Platform, behind which are fugitive convicts Victor and Viorel Topa, demonstrated by pictures published on a social network. He is seen in the entourage of DA leaders, and besides other members with shady past.

Suharenco is not the first DA member who has troubles with law. Previously, the media wrote about Aureliu Pisica, the one who abused the journalists during protests and handcuffed a child on the panel in front of the Ministry of Internal Affairs.

According to information, Pisica, aged 39, is not at his first breach of law. Previously, he was accused of murdering a man in a car accident, but got away with it.

A shady past has the DA activist Sergiu Cebotari. On his name were opened two penal cases for forced labor and embezzlement in huge proportions. According to police, 17 people suffered because of Sergiu Cebotari, the prejudice amount being of 400,000 lei.