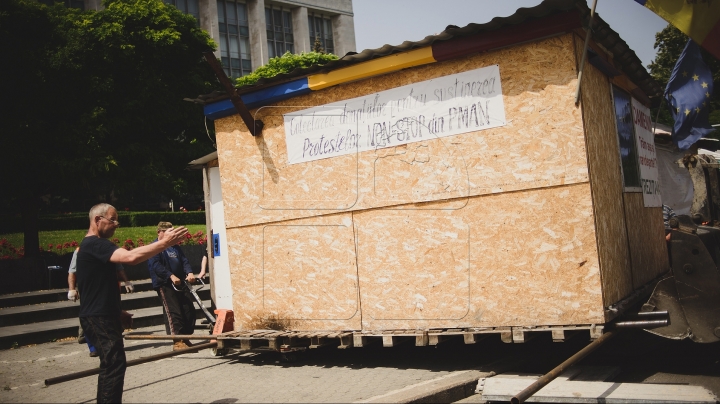 Because of tents of “Dignity and Truth” Party set out in the National Assembly Square, the Chisinau authorities cannot change the power supply network. The officials say that the tents installed on the pavements are disturbing the workers to do the earthworks for mounting the electric cables. The Chisinau residents are more and more dissatisfied by these tents and request their eviction.

The chief of the Transport Division, Igor Gamretki, says that the entrepreneur had to cancel the works because the representatives of DA Party, of Topa fugitives, decline to take out their tents from the pavement in front of the Government.

Even though the protesters have promised many times that they will take out their tents from the center of the city, this did not happen. Moreover, they lie that the city halls accepts their presence in the square.

The residents of the city say that the demonstrants have to immediately evict the National Assembly Square. If not, the authorities will have to pay fines for the delay of the rehabilitation works of Stefan cel Mare avenue.

The tents of DA Party protesters are in the center of Chisinau since fall 2015. Two weeks ago, they have been taken from the National Assembly Square for workers to do rehabilitation works.

Because of these tents in front of the Government, in 2015 and in the first 6 months of 2016 many cultural events have been cancelled.