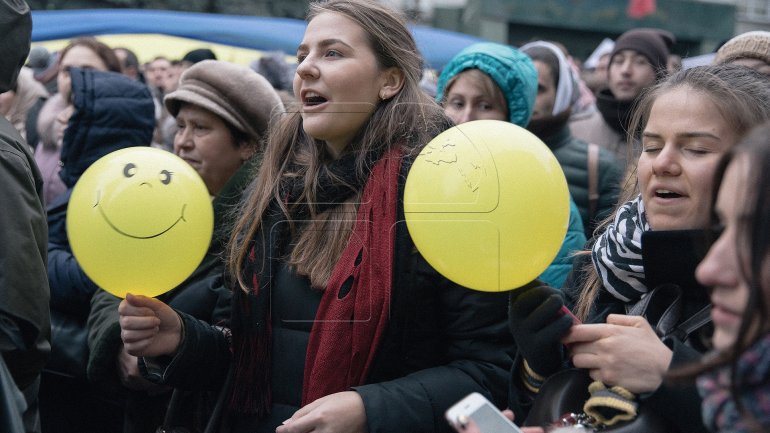 A few hundreds of young unionists and leaders of Dignity and Truth Party of Topa mobsters have protested today, being displeased by the results of the presidential elections. People requested correct elections and chanted that Igor Dodon is not their president. During the protests and the march, the road traffic on some streets in Chisinau was blocked.

"We will make appeal to CEC, will make requests and complaints to the Constitutional Court, because our constitutional right to elect and be elected was violated" said the leader of the Platform "Honor, Dignity and Motherland", Vlad Biletchi.

The protesters went in column to the headquarters of the Central Election Commission. They called for the resignation of the institution administration.
At the protest also participated the representatives of DA Party, including Valentin Dolganiuc and Vasile Nastase. Supporters of "Dignity and Truth" Party showed their support for the protests also on social networks.

Later, the demonstrators returned to the monument of Stephen the Great. The protesters carried flags of Romania and pitched a tricolor tens of meters long. They have commemorated the unionist Gheorghe Ghimpu, the brother of Liberal Party leader Mihai Ghimpu.

Not all people support the protesters approach. Some passersby had critical messages to the demonstrators:

"It is a commission, and I think it is fairly done, when two fight, the third wins".

"The presidential elections ended already. Everything is decided and I think that was conducted properly. The people chose Dodon."

The protest ended around 17:00