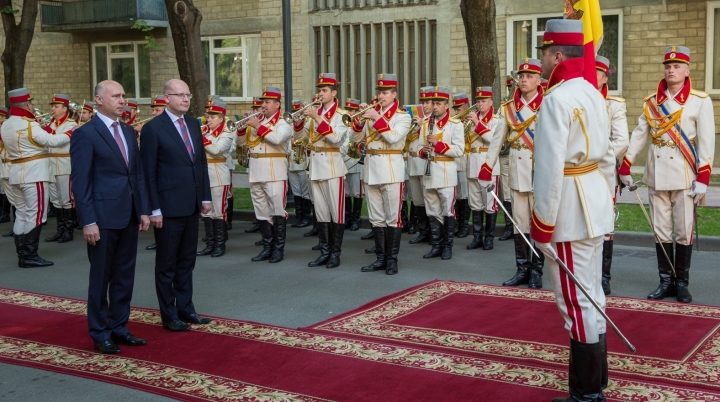 The two Prime Ministers had a bilateral meeting, as well as a wider discussion at a meeting between the official delegations of the Czech and Moldovan governments.

Pavel Filip noted that the Czech official’s presence in Moldova, after a break of about seven years, clearly showed the will of both sides to give a new impetus to cooperation between the two states.

Prime Minister Pavel Filip said that the Czech Republic was a key-partner for Moldova, and assured that the Moldovan authorities were dedicated to continuing reforms. “It is important to maintain the pace of reforms, in order to meet our goal: a democratic and prosperous Moldova in European family. We want happy citizens and a country in its deserved place in the world”, Pavel Filip mentioned.

The Moldovan Prime Minister appreciated the Czech Republic’s support for Moldova, especially, Bohuslav Sobotka’s visit. “Your presence in Chisinau, in an important period of Moldova’s European integration, honors and obliges us. This is, in fact, a signal of solidarity with Moldova”, he said.

For his part, Czech Prime Minister Bohuslav Sobotka reconfirmed his country’s openness for enlarging cooperation with Moldova. “The Czech Republic believes that Moldova is an important partner. We want to contribute to modernizing Moldova through our experence,” he said.

The official expressed support for the Moldovan government in implementing the provisions of the Association Agreement and spke out fully turning to ccount the bilateral cooperation's potential in such sectors as: food industry, agricultural sector and others.

The talks were also focused on European integration process, cooperation in the economic and trade sectors, development of the present commercial potential between Moldova and the Czech Republic and increasing the number of mutual investments.

The two Prime Ministers were unanimous in the idea that there were special perspectives for further consolidation of the bilateral cooperation, as well as within the international organizations, such as: EU or UN, as well as regional ones, like the Visegrad Group format.

Prime Ministers Pavel Filip and Bohuslav Sobotka attended a ceremony of signing bilateral cooperation documents. Thus, memoranda of understanding were signed between the Czech Czech Development Agency and Agriculture and Food Ministry of Moldova on development of ecological agriculture and the Moldovan Regional Development and Constructions Ministry on cooperation in the regional development and constructions sector. The documents provide for facilitating the implementation of European norms in ecological agriculture, constructions, territorial planning and regional development.